Previously, Critical Role had worked with Green Ronin, Fandom and Wizards of the Coast to bring Exandria content to life in books and downloads.

Named after Sam Riegel’s Taryon Darrington from the Vox Machina campaign, Darrington Press has already announced for games for next year.

Darrington Press will be lead by Ivan Van Norman. That’s the same Ivan Van Norman who runs Hunters Entertainment and therefore has experience with games like Alice is Missing, Altered Carbon, and Outbreak: Undead. Van Norman was also a game producer for Wil Wheaton’s TableTop and an exec on International Tabletop Day. Matthew Mercer will be a creative advisor.

One new game from the Critical Role team will be available every quarter. The four new games are;

A tabletop game of “A battle for life and death on the high Lucidian seas!” will be a Darrington Press flagship (pun) title.

I was holding onto the game design that would become Uk’otoa for years, as I first found the game when I was going to Google Game Nights and met Jeb Havens there (fun fact: originally the sea monster was a giant squid). Jeb had been playing this game with his co-workers for a while, and I loved it so much we made a deal shortly afterwards to let me pursue the opportunity of making it a game,”

Years later, when we started talking about the games in our first lineup, I brought up this concept to both Matt and our development team – and before the pitch was even out of my mouth we all collectively said ‘Uk’otoa!’ After everyone had a chance to play it, it was a done deal from there.”

Players get to play Vox Machina characters. The game says;

Embark on your own journey through Exandria with Critical Role Adventures! Play as the upstart adventurers Vox Machina and overcome treacherous challenges. This cooperative legacy-lite campaign game uses a unique narrative social, and combat mechanic, luring you back session after session. Within this enormous box, you’ll find a host of hidden treasures and a rich storybook to guide you through thrilling combat, dynamic character growth, and tales worthy of the name Vox Machina.”

We know from Van Norman that Critical Role Adventures is currently far from complete but the goal is very much on playing through new stories, rather than repeating Critical Role’s campaign 1.

Designed by Matthew Mercer, is an RPG set outside Exandria. It will be the first game from Darrington Press that is.

In Syndicult, players are part of mob families in a modern magic world, and they guard secrets while battling for power.

Guardians of Matrimonia is a game with pre-built card decks, in which players are pitted against party crashing monsters. The game is over if any one of the players runs out of their cards, and win if the monsters run out first. 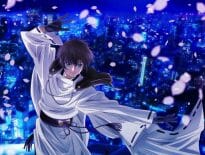 Anime Tokyo Babylon 2021 will get a TV anime 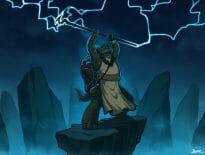