Winning the RPG Publisher poll for October is in the indie WrightWerx. That means we’re talking towering mecha and dangerous kaiju!

Each month, Patrons are invited to vote for a publisher or creator that Geek Native can spotlight. The hope is that these articles help bring interesting games, writers and designers to the attention of readers.

Jonathan Wright, who writes all of WrightWerx’s games was kind enough to speak to me, and we explore Kaijus and nerd culture together. Interested in a Mecha versus Kaiju battle? You’re in the right place.

WrightWerx is a one-man show created by Johnathan Wright. Johnathan writes all the products in the WrightWerx line, and with the exception of the Mecha vs Kaiju core book, does all the layout as well.

What’s important to you as a game maker?

The most important thing is to provide gamemasters and players with resources that will inspire their own stories. Every product starts with a story idea, or a seed for a campaign that I myself would want to play in. That’s why my books are not just collections of stats and stunts. There’s a wealth of seeds and inspiration in every book, in order to spark the creativity of players.

How did Mecha vs Kaiju come about?

I’ve been a lifelong nerd. My older brother was my first “nerd pusher” getting me into SciFi reruns in the 70s, then taking me to see Star Wars, which was life-changing for an 8-year-old.

My love of Godzilla and giant monsters comes out of this time as well. On weekends the first thing I would do was not run out to play, but to check the UHF stations for monster movies. I’d watch Bob Wilkins, the local Bay Area horror host, even though the movies scared me. I was the perfect age for the first generation of quality anime imports like Star Blazers, and as I got older I watched everything I could get my hands on, even if it wasn’t translated.

In my teens I started playing D&D with my friends, and this led to a myriad of other RPGs. No matter the system, for us it was the story that always mattered most. My favorite games have always had strong storytelling aspects.

The origin of the Mecha vs Kaiju was an announcement of the coming release of the True20 RPG. I’d been fascinated by the OGL movement and tried to support all the new publishers that were producing supplements for D&D. But True20 was designed to be open to any setting, and to showcase this they had a contest to create settings for the game. I started to think about what the world would look like if every giant monster movie really happened. I was talking to my friends about setting ideas, trying to think about other areas of the world besides Japan that may be affected, and one of my best friends said the phrase “Kaiju on the DMZ”, that is the Demilitarized Zone between North and South Korea. That was the bolt of lightning that brought it all together. It gave everything logical purpose, a reason for happening. It was important to me that the setting be believable, and that my game could serve the purpose of all good science fiction: to use the crazy, extreme, unbelievable events to explore the human condition, to use the extraordinary to examine the ordinary.

Do you still watch anime? Which shows would you recommend as good accompaniments to Mecha Vs Kaiju?

The beauty and horror of modern anime is that it is as ubiquitous as network TV. There are literally thousands of anime series, ranging from magical horror to sports and all points in between. This is wonderful, because it means anybody can find an anime series they will like. But it also means no one can see it all. I tend to stick to the classics: new incarnations of Gundam, the new Ultraman series, and those that are inspired by the classics such as Knights of Sidonia.

DriveThruRPG says you added the Cypher System of Mecha vs Kaiju to its catalogue in September. Is it really that new? Why bring the game to Cypher?

I played my first Cypher System game last year and absolutely fell in love with it. I love storytelling games, but I also love fun game mechanics. I had to invent a system for creating robots and monsters for Fate Core, using their Stunt System as a root. But in Cypher they already have a system with fun little fiddlybits that you can mix and match into new combinations, but all serving a core concept that emphasizes ease of play for the GM in order to leave the players the broadest possible canvas on which to tell their stories.

What do you think an RPG needs to be considered a good RPG?

The only difference between an RPG and a game of “let’s pretend” is rules. Rules by their nature are limits, but limits can bring structure, and that’s how you start building something. I tend to emphasize the “Role” in Roleplaying Games, so a good one needs a robust system of customizing your character. Fate Core is wide open in this regard, but in MvK I imposed a limit: Anime Archetypes. Each character starts with an archetype, from the foolish “Baka” to the heroic “Yusha”. Each has unique stunts and a capstone skill based on their character type. While this is technically a limiting factor, in practice it serves as inspiration for players.

Have the American adaptions of Godzilla a good treatment of the source material?

When I was a kid I dreamed of seeing American Godzilla movies, done with the most advanced special effects and an all-star cast, created by people who loved the material as much as I did. Zilla ’98 was NOT that. But Gareth Edwards delivered with Legendary’s 2014 Godzilla, and Michael Dougherty did it again with King of the Monsters. These movies maintained the Showa tradition of a strong human story to ground the extraordinary adventure that occured around the characters. I’ve been both entertained and moved by the new movies, and look forward to being able to go back into the theater for the next one.

Do you think we’ll see mechs in our lifetime?

I gotta be honest, there’s probably nothing more impractical than a humanoid mecha. You only need look at the video from robot tests over the years to see how tough it is to make work. Having humanoid robots might be practical, doing things that are too dangerous for humans, but sadly there’s little reason to make them giants. Still, we can dream.

What else might we see from WrightWrex in the future?

My next book celebrates one of my favorite genres of fiction by taking the MvK world into the year 202X with “Kaijupunk”! What happens when all the secret body modification technology and magical secrets of the ancient Ogres are released into the world? Kaijupunk looks at the aftermath of such a change, when the old Transhuman concepts — that of overcoming our own human frailties through technology — finally come true. Kaijupunk features rules for creating mutated characters, ogres, and cyborgs, as well as building high-tech devices. As always it features plenty of inspiration for GMs and players to create a world of adventure and danger. And it also offers a setting, an African metropolitan boomtown growing on top of the only remaining diamond mine in the world.

But there are many elements in the Mecha vs Kaiju core book that haven’t even been touched on, such as the supernatural. I’ve had ideas for a “Kami vs Oni” sourcebook for years, delving into the supernatural history of the MvK world. And one of my favorite anime series is “Aura Battler Dunbine” so a fantasy world book is also in the works.

You can find WrightWerx on DriveThruRPG. 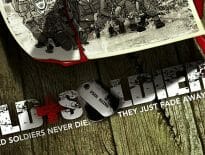 Comics What does destiny want? A review of Old Soldiers #… 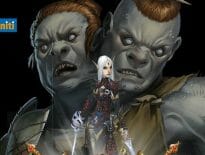