In Irregular Reconnaissance, you’ll find a series of short reviews for anime shows you can watch on streaming platforms like Funimation, Crunchyroll, Netflix and Amazon Prime.

Issue #76 of the series looks at five shows, two seasons from Netflix in the shape of Dragon’s Dogma and The Great Pretender and three from the rival Crunchyroll with Rent-a-Girlfriend, The Misfit of Demon King Academy and Gibiate.

It’s not a clean slate of recommendations. Each one of these anime showed great potential, but not all of them live up to it.

At least, that’s the opinion of this anime scout. Irregular Reconnaissance articles are always enhanced by tips and recommendations from readers, which you can leave in the comments below.

Netflix’s Dragon’s Dogma was not as good as I hoped, but better than I feared, and the surprise was sex.

A dragon attacks a town, the guard there has mainly become ceremonial since dragons haven’t been a thing for a while and the hero dies. Only to be Arisen and start off on a vengeance quest.

There was one episode for each of The Seven Deadly sins which lines up the entirely unsurprising ending. I’m not sure what the point of the show was.

I suppose, though, anime doesn’t need to have a point. We got seven fairly decent episodes out if the series which included some great scenes. The fight against the undead and hydra were suitably distracting.

Don’t regret the brief time I put into the show but it’s hard to recommend.

I really like the colourful art style in this anime about a young Japanese con-man. The backgrounds are often blends of colour, suggesting shadows or textures that aren’t really there and hinting that this is a fanciful and slightly surreal world.

The Great Pretender season 1 is three different stories, known as Cases, told independently of each other with some overlap—each one a different long con.

The first Case is the best because it’s through this that our protagonist gets in deeper and deeper. You’ll be wincing for him. Characters come to life in exciting and impressive ways.

Dumped by his girlfriend, our would-be hero hires a platonic rent-a-girlfriend, and they both have to pretend they’re a real couple.

My only concern with this surprisingly good anime was how long the writers could spin it along without that basic premises beginning to wear thin. Well, now I know; all the way to the end, and I’m looking forward to season 2.

Yes, I absolutely wish some people would just say what they’re thinking. Communication seems to be a skill that these youngsters don’t have and, at times, seem almost allergic too.

If you don’t want mechas space pilots or fireball wizards then give Rent-a-Girlfriend a watch.

Sorry to say, Gibiate goes from shaky to just giving up. What a disappointment.

The hints at an exciting story or mythology that I was hoping would come to life are addressed as inconsequential and cast aside. The twist in the plot is banal, pointless and makes no sense.

The show is about ancient Japanese warriors who are summoned to Tokyo at the tail end of a virus outbreak that’s turned humanity into monsters. Copy’n’paste CGI monsters.

Our heroes from history have to help these few survivors out. It’s a tough fight, fairly central characters die. And it’s all a waste of time. Watch something else.

I’m not sure The Misfit of Demon King Academy successfully unlocked its potential. It definitely scratched at the door, but it lacks the something-special to push to finish the job.

The Misfit is a Demon King who has two-thousand years has been born again into a peaceful world that he forged. Except, the world is not as it should be. History has been corrupted.

So, our Demon King joins the demon school and makes some incredibly loyal friends.

To be fair, I think Misfit just about avoids becoming a harem anime – perhaps by giving the king a literal fanclub and hanging a lantern on the trope. That’s corny but relatively successful.

The final scenes are the hardest to process with a plot untwist following the plot twist.

There’s a mix of hits and misses in this Irregular Reconnaissance: Anime column. That’s the nature of the beast, some shows look promising or even start out strongly only to fade away. In the comments below, let us know of any shows you rate as particularly good or bad and share your own spoiler-free scout report. 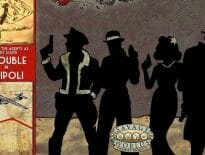