You are here: Home / Games / Tabletop & RPGs / Legends of Avallen, the RPG of Celtic mythology in Roman Britain, is a Kickstarter success

Geek Native covered the Legends of Avallen beta test back in June, and it is good to see a successful Kickstarter launch. The RPG explores Celtic mythology and humble beginnings in Roman-occupied Britain.

Designer Deren Ozturk set the target pledge total at £8,000, and now, a few days later there are well over 150 backers and nearly £9,500 in the campaign. You can follow the progress here at the Kickstarter page.

A pledge of £20 will get you the PDF edition of the rules and a coupon for an at-production-cost hardback edition. It’s not unusual to see Kickstarters taking a few quid in exchange for that “at-cost” coupon, and it’s nice to see Ozturk not doing that here.

As is increasingly common for Kickstarters from small publishers being mindful of their fulfilment duties there’s no option to get a physical edition from a print run. If you want to go paper, then you’ll need to take the print-on-demand coupon to DriveThruRPG.

Wise? Well, Deren Ozturk has a PhD in granular physics, is published in Nature and the campaign has funded. So, yeah, it might be disappointing not to have a deluxe edition of Legends of Avallen, but the POD and PDF strategy seems to have been the intelligent one.

Deluxe editions of the playing cards are possible, if 500 decks are sold via the Kickstarter, then they’ll come in a custom box and have gold trim. There’s even a separate artbook to showcase as much as possible of the game’s impressive illustrations.

Legends of Avallen, the RPG of Celtic mythology in Roman Britain, is a Kickstarter success 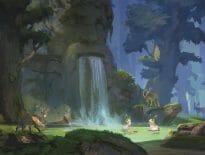 Tabletop & RPGs A look inside Tasha’s Cauldron of Everything… 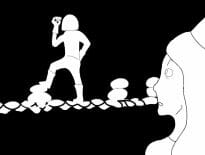