You are here: Home / Games / Mongoose and Battlefront to produce A Bridge Too Far for Flames of War

UK based Mongoose Publishing have done a deal with Flames of War publishers Battlefront to produce the first strategic supplement for the game. A Bridge Too Far will be published in July.

The additional boardgame component will include a rulebook, 46 plastic playing pieces, battle arrows, dice and a new multi-part gameboard that measures 55cm by 120cm. That’s quite big!

Battlefront, based in New Zealand, published Flames of War (aka FoW to fans) back in 2002. It’s now a very popular World War 2 minis wargame.

There are plenty of other source books; Osfront, Afrika, Eastern Front, Fortress Europe, Monty’s Meatginder and Bloody Omaha to list just a few – so we’ll have to see what Mongoose and Battlefront mean by “first strategic supplement” but it’s bound to be interesting. 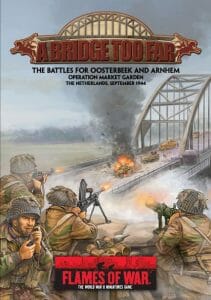 time to read: 1 min
PC Dead Frontier: Free Zombie MMORPG upgrades to 3D
Console Banned Guitar Hero: World Tour ad – too race…
💰 Copper Coins 💰 Geek Native is an affiliate and may earn commission on purchases you make from third-party sites.
🍪 Privacy & Cookies 🍪 The site uses cookies to survive. By accessing the site, you agree to use your browser to control cookie use or take 1d4-3 privacy damage (tracking). If you defeat cookies via ad blocking, please consider the Patreon. An intro to cookies, and how to control them, can be found here. I Manage Cookies