You are here: Home / TV / New Trailer for Syfy’s The Phantom

The Syfy Channel have been working on a new movie – it’s a remake of The Phantom. As far as superheroes go; he’s been around for a very long time. The comic strip first appeared in 1936.

The original Phantom was created by Lee Falk (the same guy who created Mandrake the Magician) and was set in Bengalla.

The Syfy’s take on things is likely to be very different.

New Trailer for Syfy’s The Phantom 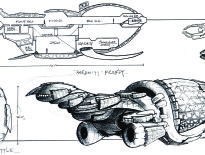