You are here: Home / Books / Flank Hawk teaser and preview

Who would win? A dragon or a panzer? Flank Hawk is a novel by Terry W. Ervin II.

He’s put chapters 1 and 2 online to lure readers in – so before the video – here’s a clip.

Guzzy signaled for my attention and pointed over the gully’s lip toward the disturbance in the undergrowth. He grinned, showing his yellowing teeth. “It’s coming for you.”

After listening to the rhythmic rustling for a few breaths, I set aside my spear and drew my broad-bladed short sword. The reeking stench of rotting flesh sent flashes of last night’s desperate battle through my mind. Screams, blood, and death echoed there.

Still smiling, my cousin scrunched up his nose and donned his rusted steel helmet before lifting his heavy frame to peer over the gully’s lip. “Give it half a moment, Krish.”

I leaned against a rotting oak rising from a bend in our sheltering gully and stared at the nameless stream trickling through its bottom. My stomach tightened as the sun’s light faded. The last few nights of battle gave me reason to fear the dark. The faint stench reminded me of the putrid odor that always preceded the zombies. My militia training on livestock corpses wasn’t enough. Walking dead, with pus-rotted skin teaming with maggots, clubbing and grasping, were far more frightening.

Guzzy nodded while checking his broad-bladed axe. “Some necromancer master ordered them forward again.” His face and cheeks looked pressed into his worn helmet. Even if my cousin was heavy, he was anything but fat. Nobody I’d ever seen could hew limbs from bodies like him.

I climbed around the rotting oak and pinpointed the rustling in the tangled vines. With a sneer set across my face to mask my disgust, I held my breath and chopped into the animated arm. My first swing cut into the hacked-off remnant from last night’s horde. The soft ground absorbed the blow. With aim, my second effort severed the hand at the wrist. Then I pinned the writhing, bloated hand with my boot before shearing away its fingers and thumb.

I kicked away the still wiggling stump and fingers. “Yeah, Guzzy, they’re coming again.” I surveyed the woods, peering into the mixture of oak, hickory and maples. They’d driven us back five miles in the last three days, hardly a fraction of the vast Gray Haunt Forest’s depths. Only one more mile south and they’d drive us out completely. “Didn’t want that thing tripping me up,” I said before returning to the mud-slick gully’s concealment.

I looked back behind our skirmish line. Men with flaming torches and boar spears like mine were moving toward our forward position. Their gray quilted armor, like mine and Guzzy’s, was more effective at warding off the chilly spring nights than enemy attacks. Twenty-three men split up and took positions to either side of me and Guzzy. A lot of new, unsure faces were among them. Unlike the shield slung over Guzzy’s back, the ones they carried were unmarred.

Guzzy said, “Let’s wet and salt our blades while we got the chance.”

I followed him down to the narrow stream. I didn’t recognize the two men who took up position to our right. “Are Vort and Darnard still to our left?” I asked.

Guzzy nodded, lifting his blade from the slow-running water. “Danner and Klano fell last night. That leaves only four of us from Pine Ridge.”

I dipped my sword into the stream, being careful not to get water on the hilt. I reached into my nearly empty pouch and sprinkled finely ground salt along the length of my sword’s blade.

Guzzy dipped my spear tip into the water and held it out for me to salt. 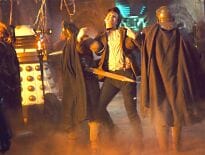