The Peach Boy is a story from Japanese folklore. An old and childless woman finds a giant peach floating down the river, takes it home to eat but inside there’s a child.

The woman and her husband adopt the boy. After all, he says he has been sent by the gods to be their son. Later on, the boy, Momotaro, goes off to tackle the marauding oni/demons and ends up working with a talking dog, monkey and pheasant to do so.

Peach Boy Riverside imagines what if there were more than one giant peach.

Okay, yeah, that trailer starts off slow as due respect is paid to the folklore… then it kicks it up a notch.

That spooky glowing eye lady is Sally, a princess who, thanks to the peach, develops the ability to fight demons.

The anime is based off Coolkyoushinja’s manga serial that will reach its eighth volume this month. Drawn by Johanne, the manga is available in Shonen Magazine R and also the MagaPocke app.

Mikoto, the demon hunter, has the power of the peach and an intense hatred to demons. He travels with a dog.

Sally is a princess of a small kingdom who encounters Mikoto and ends up on an adventure as a result. 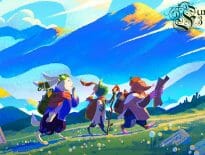 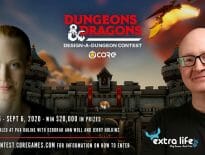 PC Manticore Games offers a $20,000 prize fund for D&…
wpDiscuzComment Author Info
Manage Cookie Consent
This site uses cookies 🍪, and links are ads that may earn bloggers some money 💰, and with this alert, I very much hope that these dark truths 🧌 are acknowledged.
Manage options Manage services Manage vendors Read more about these purposes
Preferences
{title} {title} {title}
Loading Comments...