Flashing Swords! was a seminal fantasy anthology series that was published from 1973 through to 1981.

Published by Dell books, it was edited by Lin Carter and attracted the interest of most of the important sword and sorcery writers of that time.

How pivotal was Flashing Blades? It helped showcase Dying Earth stories by Jack Vance, stories of Elric of Melnibone by Michael Moorcock, and The Merman’s Children.

Bleeding Cool collates the sheer amazement and disappointment of the authors who contributed to the book when Price’s forward was revealed in an Amazon preview.

When Bob Price sent me the manuscript, I assumed that he had shared his introduction with the authors, given the controversial content. I don’t agree with much of anything in that introduction, but I also don’t like to censor other viewpoints – so, on the assumption that all the authors were on board, I published the book. The problem, of course, is that the authors didn’t know what Bob had written in the introduction. Surprise! And of course they don’t want to be seen as implicitly accepting or endorsing Bob’s opinions by having their work appear in his book.

I read FLASHING SWORDS as a kid in the 1970s and it’s a shame that the brand has taken such a hit so soon after its reappearance. I’m speaking with most of the contributors about including their stories in a new anthology series – no politics, no drama, just sword-and-sorcery! – that I’d like to release later this year.

It’s reported that author Charles R. Rutledge had asked for their contribution to Flashing Swords 6 to be removed.

Before Pulp Heroes Press delisted the book, author Cliff Biggers, early to raise the alarm, urged people to cancel their purchase and offered personal refunds if that was not possible.

Author Frank Schildiner retracted his previous recommendation for the book.

Author Paul McNamee did the same.

All these authors had contributed to the anthology.

In a final twist, it looks as if the book was on sale for between a day and half a day before the publisher pulled it and some copies are in the wild.

Paul McNamee asserts that Robert M. Price has copyrighted the book under his name but has no rights to the stories.

You can read Bleeding Cool’s full article on the authors’ rebellion here. 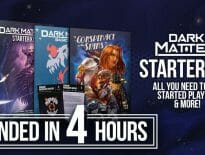 Tabletop & RPGs Mage Hand Press’ blasts off with D&D in… 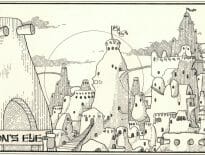