As I write this blog post I’m watching an episode of Futurama. It’s hard to imagine that the series was cancelled about 7 years ago! It ran from March 28, 1999 to August 10, 2003. Then Fox canned it.

It’s returning (thanks to Comedy Central). There have been initial dramas around getting the original voice actors in – but that’s all now behind us.

What’s ahead of us? A head, perhaps, perhaps more! CC have released the first initial image of the show (which I first spotted on SyFy UK’s blog!).

What do you think it shows? I think it shows the crew being regrown from their “heads in a jar” state.  Yup, Fry and Farnsworth aren’t in the image either. 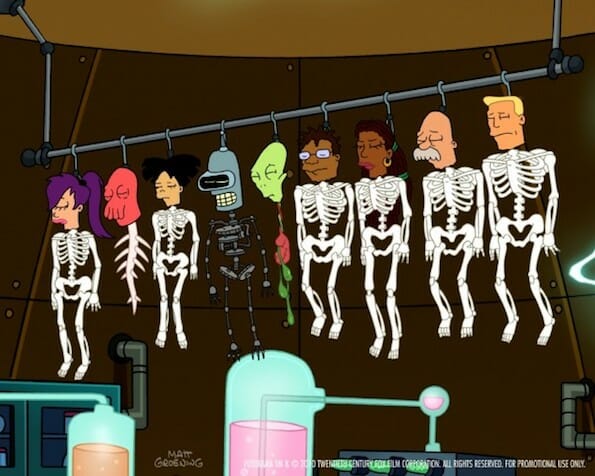 Console An introduction to Enslaved: Odyssey to the West

Movies What’s hidden in the Super 8 trailer? The Sc…
💰 Copper Coins 💰 Geek Native is an affiliate and may earn commission on purchases you make from third-party sites.
🍪 Privacy & Cookies 🍪 The site uses cookies to survive. By accessing the site, you agree to use your browser to control cookie use or take 1d4-3 privacy damage (tracking). If you defeat cookies via ad blocking, please consider the Patreon. An intro to cookies, and how to control them, can be found here. I Manage Cookies