You are here: Home / Games / Tabletop & RPGs / Amnesty now, but did Posthuman and Catalyst war over the Eclipse Phase RPG 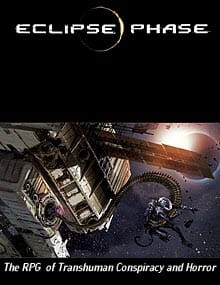 First up, let me say that Posthuman’s Catalyst / BattleShop Amnesy Program is a good move and a great gesture from Posthuman and Adam Jury.

In short, if you bought Eclipse Phase RPG products from Catalyst Games’ BattleShop then Posthuman will replace your products. This matters because PDF RPGs sometimes update and without a valid product you won’t get this update.

In the deal you get %100 of your money back in coupons so you can re-buy the game over at DriveThruRPG.

By the way, Eclipse Phase normally costs £35 but is currently on sale for about £10. I’m going to buy a copy.

So how come Posthuman are dishing out coupons in the first place?

A quick check of Posthuman co-founder Rob Boyle’s blog confirms that Eclipse Phase was licensed to Catalyst Games Labs back on October 2009.

Skip a head to April 2010 and over that the Eclipse blog Rob is writing about taking back control of the Eclipse Phase IP.

The same blog post has a snippet from a press release announcing Catalyst Games Labs wouldn’t be working with either WildFire and Posthuman Studios any more.

This press release makes it sound as if Catalyst Games Labs had to call the end of things – perhaps due to the economy – to focus on their core BattleTech and Shadowrun lines.

Catalyst Game Labs is currently engaged in negotiations to end its agreements with WildFire and Posthuman Studios. Once the terms are finalized, Catalyst will no longer publish CthulhuTech or Poo: The Card Game for WildFire, nor will they co develop and publish Eclipse Phase for Posthuman Studios.

“It’s been fantastic to be involved with growing CthulhuTech alongside WildFire, while also launching Posthuman Studios’ Eclipse Phase,” said Randall Bills, Managing Developer. “We love both of these universes and want to seem them grow and flourish. However, in our current situation we need to re-focus on our core brands of BattleTech and Shadowrun, while developing our original games. As such, while we are parting ways with both companies, we’ll be doing everything we can to support WildFire and Posthuman Studios as they assume the full mantle for their game lines.”

It could well that Adam’s choice of the word “Amnesty” is simply due to dramatic flair. I suspect that’s true.

But I also suspect both companies (as companies should do) tussled for the financial upper hand.

Not sure what Catalyst Games Labs offered to Posthuman in exchange for selling their products – but it would have to be something more than just virtual shelf space. That’s easily enough found at DriveThruRPG/RPGnow.

I doubt the two companies ever actually went to war – but I bet it was tense.

I’m glad that fans loyal enough to pay for the PDF game haven’t been caught up and caught up in the exchange. Two thumbs up to Posthuman for the coupon program.

I think you're missing some other points to the “Catalyst story” — this link would be a good place to start: http://ogrecave.com/2010/03/18/catalyst-monetar… — but the dissolution of our partnership isn't really based on monetary issues.

And the low PDF price isn't a sale price, although the way it's setup on DriveThru makes it look like that — we think (and have sales figures to support) low PDF prices result in more sales and more money in the long term, even if we make less per sale.

Hi Adam, thanks for popping over and leaving a comment. I didn't expect one. Thanks also for the OgreCave link. I need to re-review how I subscribe to that blog; should be signed up to their RSS but seemed to have missed that post. I've read it now. Catalyst's press release says, “We also remain committed to plans for our beloved licensed games: Shadowrun, BattleTech, Eclipse Phase, and CthuluTech.” Allan ponders, “Gamers may want to keep watch for any news of the Shadowrun and BattleTech licenses lapsing and getting reeled in by Topps, or news of publisher changes for Cthulhutech… Read more »

I'd suggest going through Catalyst's various announcements since then, in chronological order. Then do all the usual read-between-the-linesing, and contrast that with what Posthuman has said and what WildFire has said over on their forums. :-)

(BTW, I picked “Amnesty” for the common usage I've seen, the “drop your old gun off at the police station, no questions asked, and get a box of Girl Scout cookies free” sort of program … it perhaps has stronger implications to others than I intended!)

Okay, thanks. I don't want to draw you on a situation you might not be able to comment on directly – whereas we bloggers have the luxury of being able to speculate :)

I do think it's great of Posthuman to come up with Amnesty program and I think the name makes it clear to customers what they need to do.

Some time in the near future you must let me come back to you and Posthuman for a Q&A interview on Geek Native.

Hit us up anytime for interview/media requests: info at posthumanstudios.com will get both Rob and myself.

Amnesty now, but did Posthuman and Catalyst war over the Eclipse Phase RPG