You are here: Home / TV / Anime / A fist-flinging success: The God of High School’s debut

I’ve been watching anime for over 20 years, and I’m struggling to remember when a series made such a strong debut. Attack on Titan, perhaps?

Of course, it’s a nod to the rising popularity of the genre, but as Crunchyroll launched their latest Webtoon partnership and Crunchyroll Original property, social media was full of people raving about the opening episode. Nich Valdez of ComicBook.com says the show was trending.

The opening scene does not set the tone. The first minute or two feels like a different anime to the rest of the episode, but no less as impressive as a result.

What these opening scenes give to us is an answer to a mystery that appears in the show’s final trailer.

In the trailer, there’s a few seconds in which some sort of apparition appears in the arena. Is it really there? Or is it just a visual metaphor to suggest a fighter is about to unleash their most powerful move?

It’s no metaphor. The God of High School wastes no time in letting us know that this is more than a martial arts spectacular.

However, after that introduction scene, we get a dramatic change of tone as we come to focus on the main characters.

As the camera swings around to the contestants, we get a good dose of the show’s passion for high-octane and physical (but not goofy) humour. It’s like a Holywood movie opening with a car chase as a way to grab and hold your attention.

As the anime revs up, we start with Jin Mori in a mad dash not to be late or to wreck his bicycle in the effort.

Mori is one of the contestants in the hard to get into, and much-hyped The God of the High School contest.

It isn’t just the visuals which are dished out liberally in the opening sequences but Jin Mori’s weird black eyes. Given the dramatic opening scene which leaves a holiday island imprinted with a giant cross, I can’t help shake the feeling that these eyes will be relevant. We’ve all seen Naruto-style shinobi eyes, after all. Yongje Park, the webtoon’s writer, knows this. We’re being teased.

Jin Mori encounters Yoo Mira, a geeky-looking girl with a thing for men with muscles, and the nonchalant Han Daewi on the way to the contest.

Inside, once the fighting starts, Jin Mori comes to Yoo Mira’s defence. Boy steps in to save the girl. We’re allowed a smirk at that because as part of the introduction/marketing to the show we know the character sheets for these two (at least as they seem to be now). Yoo would kick Jin around the arena if she wanted to.

As it turns out, those character sheets are more than just a marketing stunt. They’re part of the anime. Each contestant in the arena wears a hi-tech wrist monitor which shows their power level. Imagine what that does to combatant’s tactics!

I’m desperate for episode 2, but I’m also dreading it. After such a strong start, isn’t the only way down?

A fist-flinging success: The God of High School’s debut 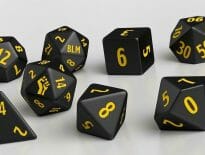 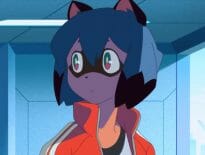