The most recent issue of the Dragon+ magazine as an interview with illustrator April Prime. In it, April plots the course of taking of a concept through to a finished commission piece for Icewind Dale: Rime of the Frostmaiden. That’s D&D’s next official adventure.

It’s an interview that touches on the like of snowy owlbears and knucklehead trout. April’s favourite, though, is Angajuk.

My favorite was Angajuk, a sperm whale that can talk. The brief was that Angajuk has a lodge strapped to his head that characters sit in as he ferries them across the sea. I thought it was a shame not to take the opportunity to create a fantasy submarine, so in my concept art I pitched the structure fitted to his head as being open-topped. Imagine a boat without sails that’s strapped to his body using a big leather harness. I had the idea of him being able to blow a whale-sized air bubble over that boat. The doodle I did of him was probably the roughest drawing of all the ones I created but it clearly sold the idea because Chris Perkins really liked it.

You can see the finished illustration in Dragon+ or by waiting for Rime of the Frostmaiden and risking a look inside. 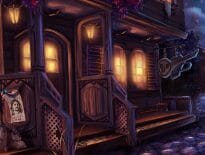 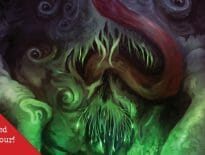