You are here: Home / Games / Tabletop & RPGs / Green Ronin finally gets to announce The Lost Citadel RPG for 5e

The Lost Citadel has not been an easy project for Green Ronin.

Geek Native covered the launch of the Kickstarter in July 2017, the digital core book has an estimated delivery date of April 2018, and here we are in May 2020 with the book finally on the digital shelves. Mind you, as a backer; I’ve had access to my copy since March.

The Lost Citadel is a fantasy world besieged by death and the undead. It’s darkness and despair come to high fantasy. The Lost Citadel itself, the fortress, is the last stronghold of the living. Built by the dwarves, the Lost Citadel opened its gates to the few survivors of the failed campaign against the undead and let them in.

The game is set seven decades after that final retreat.

As a 5e game, you need a copy of the Dungeon Master’s Guide and Player’s Handbook to use The Lost Citadel (Green Ronin suggest the Monster Manual is helpful to!) as the book effectively takes those worlds core D&D is built for and adds on an undead apocalypse.

In the book, you will find new character races and fresh takes on the more traditional fantasy races in 5e that are appropriate for the setting. The same applies to character classes with both new (such as the Penitent and Sage) and modified ones.

Also, a new system for martial arts is provided, and it works the concept of exploiting opportunities that come up in combat.

Magic is different in the world of Zileska, the default setting for The Lost Citadel, fast magic summons “Woe”, a force of corruption that came with the undead hordes. Rituals are safe; but slow.

In fact, Green Ronin have put the whole table of contents online (PDF Link) for you to take a look at.

The digital copy is available at the usual sources such as Green Ronin’s store and DriveThruRPG. Physical books are coming too, but it’s impossible to say when they’ll arrive in your local area due to the global restrictions during the crisis. 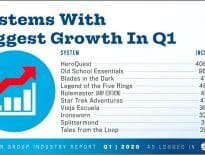 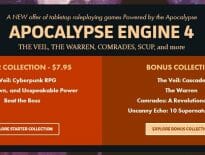 Tabletop & RPGs 7 Powered by the Apocalypse RPGs in The Bundle of …
wpDiscuzComment Author Info
Loading Comments...