You are here: Home / Games / Tabletop & RPGs / Momentum or Chaos: A review of the Dishonored RPG

Is this game broken?

The Dishonored RPG based on the computer game by Arkane and made into a 2d20 tabletop by Modiphius Entertainment has been DriveThruRPG’s best seller in the few weeks it has been out. It’s a whalepunk game; a dystopian society and strange inventions both powered by burning whale oil.

The early reviews are split between hate and love. This is a review of the third update of the game. That, at least, acknowledges Modiphius is being responsive to those negative reviews.

I like the game. This will be a positive review, but, no doubt, Dishonored has had a rocky start. Thankfully, the paper version isn’t due to be sent to the printers to the end of the month, and these initial waves of corrections are coming in time.

It appears that between drafts, some old rules elements and wording slipped in or had been missed when we removed any old terms, while a small number of changes that were made didn’t make it to the drafts that were sent for layout.

Of course, I didn’t know any of this when I picked the game. I picked it because I’d seen the trailers for Dishonored 1 and Dishonored 2, liked the look of both, found time to play neither and I was curious to know whether or not I could experience the world through the tabletop.

Here’s the short answer: I think you can.

However, I think it would be better if you’ve played the game and have seen the world and talked to the relevant NPCs.

I wouldn’t want to try and run Dishonored, I would want to play in it and work with a GM who knows the world.

That doesn’t mean the game’s broken, though. It just means experience makes it better.

I think there were three problems people identified with the first releases; only a few void powers, impossible rules and a harsh world.

The impossible rules have been fixed. Characters can now, for example, spend enough Void points to actually activate Void powers.

I don’t mind that the world is harsh. It does seem that a starting character can’t be well equipped, but that seems fitting. I’m not sure it really matters how NPCs stats compare to one another. Let’s get past the ‘who would win in a fight’ way of talking about fandoms.

I would prefer more Void powers, but it’s not a showstopper to me that there are less than a dozen. It’s not ideal if characters overlap in capabilities, but depending on the type of game you’re running, it shouldn’t prevent a single storyline from unfolding.

So, here’s my summary; I like Dishonored, it’s not broken, you don’t need to have played the computer game, and both the world and the system feel great.

Let’s go in a bit deeper;

I like the system, and it starts with words that describe characters and very swiftly unpacks into an elegant system.

Add skills to styles if you can make an appropriate case for doing so – moving boldly, talking cleverly, etc., and you’ll give yourself a target number to roll under.

Generally, you roll 2d20 (hence the name of the system), but there are things you can do to get more. You might spend a point of momentum or give the GM a point of Chaos.

You need to roll enough successes to pass the check. The GM decides how many you need.

There are a few other ways to influence totals and dice rolls, but that’s the bulk of the system, and I think it works well.

If you roll more successes than you need in a challenge, then you score Momentum which you can spend later.

You can use those points to buy extra d20s to roll, create truth or ask a question.

I think asking a question needs a little more explanation. I ask my GM questions all the time; clarification on what my character and see, hear or sense during an encounter. I wouldn’t expect to spend precious resource points on this.

Creating truth is more comfortable. Let’s say you have your character dangling by her fingertips form a window’s ledge; you can spend a momentum point to make sure there’s a ledge for her feet to rest on.

The GM can sometimes do the same against you; buy spending Chaos points.

I suspect one use of Chaos points that might be controversial, but which I like, is that they’re built up when the characters take action that causes ripples in the world. GMs tell the players what’s about to happen, and they can reconsider their action.

For example, perhaps Bob thee NPC is angry enough to attack the PCs on sight happens to be in the pub on the corner of the street. Let’s also just say that a PC decides they want to visit that pub. The GM can say; “Sure, but going into that pub will generate 1 Chaos point”. Why? Stepping into that pub would cause chaos.

If the PCs venture inside anyway and end up in a fight, then the GM might even say, “If you murder Bob that’ll generate 5 Chaos points”.

An aspect of 2d20 in Dishonored that I like a lot are Tracks. These are visual representations of how well or poorly things are going.

As a side note, most minor encounters don’t have a Stress Track which means one success in a combat challenge defeats them.

There’s a Stealth Track, which works wonderfully for tension, as the more you progress along it, the more alert and close to noticing you the NPCs are. Furthermore, the GM designs the length of the Stealth Track to suit the scene. Sneaking through a pretty much empty mansion? The Stealth Track is vast with lots of room. Trying to sneak into a busy office? The Stealth Track might be tiny.

There’s also a generic progress track and an Intrigue Track, but my next favourite is the Reputation Track. As you would expect, this tracks the PCs reputation with particular groups. I like this because it’s a reminder that status with groups is real, matters and shows whether characters are doing well or poorly.

Dishonored was developed by Virginia Page and Federico Sohns. Page is working on Modiphius’ Homeworld and has worked on Fallout and Star Trek. I know Sohns better, from the not-quite-Modiphius Nibiru.

Nibiru is a sci-fi heavy in theme, flavour and imagination, so it wasn’t a surprise to see Dishonored’s introduction laying out the themes that the game explores.

Those themes are Order and Chaos, the official religion of the city-setting (The Abbey of Everman) versus the cults (good and bad) and rulers versus the meek.

Crucially, I think, jumping from rooftop to rooftop and using your Void powers as superpowers to fight crime isn’t there. That’s why I’m not so hung up on the anaemic list of capabilities.

I don’t think the tabletop game contains any behind the scenes spoilers for the computer game. There is this otherworldly plane or power known as the Void. It’s the source of the supernatural.

In particular, a child was stripped of his name in a ritual many years ago, which allowed the Void to bond with him. This created the deity known as The Outsider.

Very occasionally, The Outsider finds someone with the potential to create change and gives them his mark. The mark of The Outsider grants supernatural power.

I love the concept.

My concern, though, is how many PCs should or should not have the mark of The Outsider. When I came to the game, not knowing the world details well, I assumed all the PCs would have it. Now, having been introduced to how rare the mark is, I worry that would be too many. It might be up to a talented GM to explain why, potentially, a whole group is marked.

The tabletop game also supports Bonecharms. These are tactile items. PCs can carry around and receive a bonus for. In a lovely game balance move, you can only carry so many before they start to cancel out.

The solution? A Bonecharm stash. I can see so many plot opportunities around such a thing.

However, there are different types of Bonecharms, including corrupted ones that don’t work as expected. It’s up to the GM to figure out if players can make their own or make mistakes and corrupt them.

As I said at the start of this review; I would be happy to play in the game, I would prefer to have a GM who have completed both computer games, and I would not want to run the tabletop for those who know the computer version.

That reluctance is not down to knowing the geography. The Dishonored tabletop RPG does a great job of touring the places that make up the world.

Dunwall is the capital of the central part of the Empire and, I sense, the primary setting of the computer game. There is no shortage of interesting places in Dunwall to visit.

The game isn’t restricted to Dunwall and we get a tour of the Empire and hints from outside. It’s not a problem.

In fact, if I was told I had to GM Dishonored or never play in it – I would pick a location on the fringe of the Empire and set my game there. If I’m pushed; there’s enough supporting text here to overcome my discomfort of running in a game based in a franchise I’ve only ever experienced as settings text and rules.

The people, though, are a concern. I suspect there are fears about spoiling the computer game, but I’m not happy I could run any of the big-name NPCs right. I don’t know whether there are clear cut goodies and baddies, who is trustworthy or who might support player characters.

I think the tabletop RPG should just have shrugged off spoiler concerns and simply told me where on the various themes the key NPCs stand.

Here’s the trailer for Dishonored 2. I believe that the Empress as the action hero.

I appreciate the concerns over the initial releases of the game, but they don’t phase me.

As I scroll through Dishonored for this review, I’m reminded all over again why I like it. It looks gorgeous, with plenty of evocative art. The rules are streamlined and encourage the sort of roleplaying experiences that bring the game to life.

I’m happy to endorse the Dishonored RPG. I like it.

My copy of the Dishonored RPG was provided for free via the DriveThruRPG Featured Reviewer program.

Momentum or Chaos: A review of the Dishonored RPG 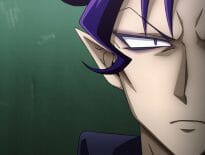 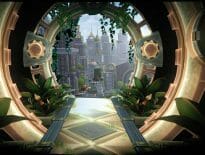