The Elephant & Macaw Banner is a new RPG from Porcupine Publishing, it’s up on Kickstarter, but you’ll get a good look at it here with an exclusive art preview and a link to the pay-what-you-want Player’s Guide.

The RPG has a fresh feel, set in a fantasy version of 16th-century Brazil. Designer Tom McGrenery is asking for $77,000 Hong Kong dollars to fund the campaign and already has over $24,000. That’s more than £2,300 against a target of about £7, 500. You can follow progress on the Kickstarter campaign page.

The Player’s Guide won the Judges’ Spotlight ENnies in 2019 and the Kickstarter campaign says you can download it for free. As usual, Geek Native likes to encourage people who can afford to, to pay an appropriate amount when a game is marked pay-what-you-want rather than free. However, if you’re seriously tempted by backing the RPG, then please do take a look as I suspect the Guide will help you decide.

While the campaign is being run, the core rulebook is being printed in the United States (by Bang Printing of Minnesota) and will be 224-page, colour softback.

Elephant & Macaw Banner is a game of muskets and magic and already an award-winning fiction series. The fiction follows the Dutchman Gerard van Oost and the Yoruba Oludara exploring a fantasy Brazil that’s steeped in real-world mythology.

Before we look at some of the extra art Geek Native has to show off, let’s talk cash.

There’s a hardship pledge of HK$100 (that’s about £10) for the PDF. That means if you’re struggling financially, you have that option. At the time of writing, 5 people have taken in. The rest of us should pay HK$150 for the Kickstarter price on the PDF. 25 people have taken that route.

I’m not buying the book for the cover, but the art looks amazing, and that’s absolutely one reason why I’m tempted. I also want to learn more about Brazilian mythology, and I like the look of the lightweight rule system.

A band of adventurers – the pre-generated PCs in the appendix, who appear in vignettes nd examples of play throughout the book – take on a guant bat.

A terrifying creature of darkness. Its elongated body is always cloaked in darkness except the head, which is shaped like a horse’s skull.

An enormous biped with a muzzle like that of an anteater. Its howl paralyses with terror, and Its skin is immune to all weapons, even enchanted ones. Its only weak point is its belly button…

The Anhanga is a stag of extraordinary size. It has velvety horns and blazing, fiery eyes that can drive to insanity anyone who dares face it. The Anhanga protects the animals of the forest. Hunters who show respect for nature have nothing to fear from it, but those who treat animals with cruelty or attach their young will receive no mercy.

The Labateau is a monster that arises when a person is so horrible that they lose their humanity and become a beast. It has a single eye the size of a lemon, huge fangs, and venomous spines on its back and arms.

A small human-like creature with feet that face backwards.

Considered a kind of evil spirit by indigenous people, Motucos are treacherous and murderous by nature. They are cowardly, attacking only when they outnumber their enemy 2 to 1. They like to put poison on the darts of the blowguns they use in ambushes.

Tempted? You can back the campaign here or head to DriveThruRPG to check out the Player’s Guide. 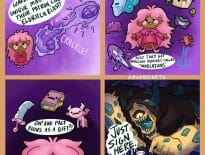 Comics The lovely gifts Warlocks get… 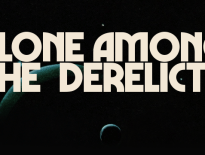