You are here: Home / Games / Tabletop & RPGs / Destiny Aurora will get it’s own Starfinder powered RPG

Frank Zanca’s Destiny Aurora sci-fi novel series is getting RPG. The Kickstarter for the project wanted $5,000 and, with 22-days left at the time of writing, it has collected over $11,000 from fans and gamers keen to see a new Starfinder universe.

The novel has a series of misfits hunting an assassin which seems like a perfect set up for an RPG. Equally, in the Destiny universe, there are three factions involved; the Coalition, Renegades and Dreggs. The latter are crews sworn to the warlord Darius Greaves. You can find out more or pledge at the campaign page.

There’s no messing around with thank you or tracking pledges. The first tier is US$20, which will get you the Destiny Aurora RPG in PDF and issue one of the comic book.

You will need a copy of Starfinder to play this RPG. The Destiny Aurora RPG weighs in at 190-pages, but it is an expansion, not a set of standalone core rules.

The next tier is $40, which doesn’t just get you a printed copy, it gets you a signed printed copy. That’s unusually good value for a signed copy. You get the PDF and comic book too as well as your name in the special thanks.

There are four novels in the series and by paying a little more over the basic RPG price you get PDF access to these. The pledges go all the way up to $250, and there are already a half-dozen backers at that tier.

There’s no shortage of quality art. I like this, especially if we’re introducing new races that aren’t tradition Western fantasy since I appreciate the visual queues.

That said, I noticed in the pitch video the initial pictures shown are all busty women. I think that’s an established sales technique, and to be fair, it doesn’t persist.

The assassin Kunlore Throne, though, deserves special attention. He’s not going to hide in plain sight, lurking in the crowds, before striking at this target, is he?

I think it’s also worth pointing out that Frank Zanca/The Destiny Horizons Kickstarter account has backed an impressive 155 projects. Here’s a creator who’s been helping the community. I’m glad this Kickstarter is going well.

Destiny Aurora will get it’s own Starfinder powered RPG 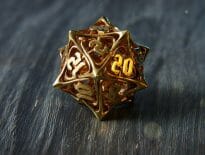 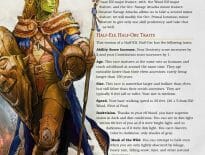