If you’re a Sherlock Holmes fan, then you’ll know the name, Irene Adler. The woman.

The dates do not line up, The Five Orange Pips being set a year before A Scandal in Bohemia, but it is widely believed that was Doyle’s error and that one woman was none other than Adler.

In Adler, there’s a touch of the League of Extraordinary Gentlewoman, as the genius teams up with famous women from science, history and literature such as Jane Eyre, Lady Havisham, Marie Curie, Armila and Ayesha.

Cover A is illustrated by Butch Guice and the series by Paul McCaffrey (TMNT and Men of War). 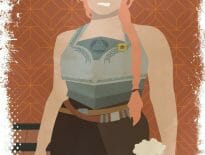