You are here: Home / Games / Tabletop & RPGs / The sleeping giant awakens – Osprey Games gets into RPGs

In December, the Bloomsbury owned Osprey Games will publish two RPGs. Romance of the Perilous Land will be written by Scott Malthouse and has a British folklore vibe to it while Paleomythic is a stonepunk RPG from Graham Rose. At the helm of both is Philip Smith, Head of Osprey Games, and Philip was kind enough to find time to answer some questions from Geek Native.

Why the decision to go into tabletop RPGs and why did it take so long?

Because we love RPGs! There are a number of us here that play RPGs (or are slightly lapsed roleplayers) and I think it was just a matter of time and focus. There had been a limited overlap with RPGs here before – the Osprey Adventures line were useful sourcebooks for a variety of fictional topics – but we were pretty much solidly wargames-focused until the establishment of Osprey Games five or so years ago. With that, we introduced board and card games to our portfolio. Now that that is a more established line, we started thinking about the next areas for expansion – and RPGs were the obvious option.

What’s the stories behind Romance of the Perilous Land and Paleomythic? I mean, why did you pick those two projects to go forward with and how did you line them up in the first place?

I was introduced to Scott (Malthouse) by Joseph McCullough, the designer of Frostgrave. Joe was a fan of Scott’s award-winning Quill letter-writing RPG, and let slip that Osprey was starting to give serious thought to RPGs. A few conversations later, we started discussing the possibility of bringing out a new edition of Romance of the Perilous Land (the original having been self-published as a PDF by Scott) – we really liked the system and the focus on folklore was right up our street. Paleomythic is another new version of an older game – like Romance…, it had been released as a PDF several years ago. I’d picked up a copy and enjoyed it, so we hunted down a contact address for Graham (Rose) and asked him if he’d be interested in working with us on a new edition.

Both Scott and Graham had cracking games; Osprey had artwork, publishing, and distribution – it’s a natural pairing! Neither game is simply the old edition with new artwork, however – they’ve been updated and further developed by the designers as well.

We’re not just reworking existing games, either – we’re also producing some all-new titles… though that’s a story for the future…

The working title of this interview is “The sleeping giant awakens” and maybe you think that’s overdramatic, but surely Osprey Games could be immense. You’re part of Bloomsbury, and that’s the publisher who sits down with the likes of Sarah J Mass to work out when Throne of Glass books should be published, and you’re the publishers of Harry Potter. You’re higher up the food chain than other RPG studios, you’ll surely get the first bite at projects more often as a result. Or is this entirely wrong?

While it’s true that we are part of Bloomsbury, and we have leveraged that in the past (see, for example, our recent Embers of Memory card game, based on the works of Sarah J. Maas), we do also recognise that, as a publisher, we’re only as good as our last release. Being part of Bloomsbury might open doors, but it’s the quality of our games that I hope will define us.

On the flip side, I imagine you have more paperwork, structure, governance as part of a publicly listed company than an indie studio with only a few full-time staff. Are there challenges you face which feel pretty unique to Osprey?

I don’t think anyone likes oversight and paperwork, but they’re just part and parcel of any job, really. While we do have checks and balances in place, we are fortunate in that they’re tempered by an enthusiasm for games throughout the company.

Which of Osprey’s current titles would you like to see as an RPG?

I mean, Frostgrave is a pretty obvious answer – it’s already virtually a D&D campaign, albeit with a very heavy spellcaster focus. Actually, I might be tempted to run it with Ars Magica or something – each player controlling a wizard and a couple of companions – all it’d need would be some ruins and snow! A fair number of our current titles would work well as RPG settings or adventures. The one that really appeals right now is Zona Alfa, our upcoming (January) post-apocalyptic wargame in the vein of STALKER and Metro-2033.

What do you think the opportunities and challenges for new RPG publishers are in the year ahead?

I think RPGs will continue their renaissance, becoming even more mainstream and attracting an ever-larger audience. This is fertile ground for new RPGs, although there are already a lot of titles fighting for airtime, and that number is only going to increase. I suspect we’ll see an increase in the number of IP-licensed projects off the back of this more mainstream position (perhaps that’s a slightly longer-term view). While that’s great for fans of the properties, I hope they don’t starve smaller, non-IP-based games of oxygen.

December might see the first two tabletop RPGs from Osprey Games, but you’ve been producing wargames, card games and board games for years. Do you think this has been a helpful experience for RPG publishing? Which of these other gaming titles are currently at the forefront of your mind and why?

It’s definitely been helpful, yes. Osprey’s always had enthusiastic audiences, amongst the military history crowd, wargamers, and, most recently, board and card gamers. We may be new to publishing RPGs, but we understand the roleplayer’s passion for the hobby. It does also help that the Games team are from those same fanbases and share those passions!

A policy that we’ve always maintained, and which publishing board and card games have really shown the value of (though it originated, albeit on a more subtle scale, with our wargames), is, as much as possible, shaping the product to the needs of the game, rather than attempting to fit the game into pre-determined formats. With a handful of exceptions, our games are designer-owned, and a close collaboration with the designers, transferring their visions to the final product as much as possible, does produce some of the best games.

As for what other games I’m thinking on… I think the main two right now would be two games from Joe McCullough – Oathmark, a mass-battle game that has been in development for some time, and that I’m keen to see available at last – and the second edition of Frostgrave.

As much as you can say, what can you tell us of your RPG roadmap? What can fans realistically hope to see from you in the coming year?

So, we’re not going to try and out-Pathfinder Pathfinder or anything just yet! For now, we’re focusing on small, thematic games. We’re also not going to be releasing huge numbers of RPGs each year – rather, we’re keeping it to a modest number for now – two, maybe three at most. We’ve already got 2020 lined up. Genre-wise, it’s wide open! My colleagues and I have diverse tastes in RPGs, so there’s a home here for pretty much anything. We’re always open to submissions and there’s always the chance (risk?) that I’ll have “a bright idea” and go hunting for something specific…

The sleeping giant awakens – Osprey Games gets into RPGs 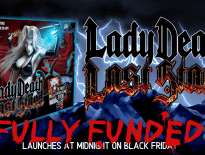 Sites Audio EXP: #21 – Locke & Key with the T…
wpDiscuzComment Author Info
Manage Cookie Consent
This site uses cookies 🍪, and links are ads that may earn bloggers some money 💰, and with this alert, I very much hope that these dark truths 🧌 are acknowledged.
Manage options Manage services Manage vendors Read more about these purposes
Preferences
{title} {title} {title}
Loading Comments...