Dias Ex Machina Games have been our Spotlight RPG publisher of November. December’s winner will be announced shortly.

Geek Native’s patrons can now take part in the vote to pick an RPG publisher for January. The winner will be an indie studio or similar, that gets a whole article to themselves on Geek Native and other mentions.

If you’re a patron then you can vote here.

The five candidates for January are;

The hope for the RPG Publisher Spotlight feature is to try and get smaller publishers and studios some attention. In the few months that the Spotlight has been shining, we’ve already found interesting stories, struggles and success and a host of great looking games.

I’m usually able to be pretty quick when it comes to closing the poll and opening a new one for the next month. Will I be doing that on January the 1st? I suspect there’s a fair to high risk of hangover inaction due to the importance of Hogmanay here in Scotland. Expect delays. 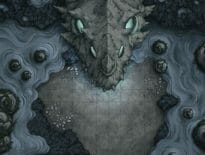 Tabletop & RPGs Venatus Maps shows off this incredible dragon skul…
💰 Copper Coins 💰 Geek Native is an affiliate and may earn commission on purchases you make from third-party sites.
🍪 Privacy & Cookies 🍪 The site uses cookies to survive. By accessing the site, you agree to use your browser to control cookie use or take 1d4-3 privacy damage (tracking). If you defeat cookies via ad blocking, please consider the Patreon. An intro to cookies, and how to control them, can be found here. I Manage Cookies