You are here: Home / Games / Tabletop & RPGs / Free to Download: A preview of City of Solstice

Earlier this month, Geek Native visited the Kickstarter project for City of Solstice.

This is an OSR setting from Charles Rice and Apocalyptic Games which is something of a fantasy version of The Untouchables. It is set a decade after heroes failed and let the city fall under the evil control of the Star Society. Now, the games’ PCs are members of the guild charged with keeping order in the city. Can they make a difference?

There’s a pay what you want Quickstart for City of Solstice live at DriveThruRPG. It’s a chance to take a peek at the setting before you pledge to the Kickstarter and to support Apocalyptic Games with a little cash. If you feel like doing that, pop over there right now.

You can check out the Kickstarter campaign here and follow or back the project.

A pledge of $15 will get you a PDF of the setting and all stretch goals unlocked, as well as your own copy of the preview.

It’s only a step up to $30 to add a print-on-demand coupon for the either the hard or softcover of the setting. That pledge includes the previous rewards.

Geek Native has been given permission to let readers look at the Quickstart for free. Afterwards, I chat to Charles – who still plays AD&D – about OSR and what it all means.

City of Solstice is a setting for OSR fantasy campaigns. What’s OSR?

The short answer is of course Old-School Revival. Someone (I think it was the gentlemen that put OSRIC together) had the brilliant idea that you could reverse engineer older editions of D&D using the material provided in the open gaming license.

For me, OSR is about the feel of the game, and the expectations. Characters are their class, and their equipment. The DM is going to tinker with the rules. There’s going to be an adversarial relationship between the DM and that players, that’s 90% joking and 10% serious.

Modern RPGs range from rules-light to detailed and complex, there are simulationist games and those that prefer abstraction, and there are games with a focus on tactics or those which lean on dice rolls as well as ones that emphasize storytelling. Why would gamer prefer to turn away from such a welcoming and eclectic mix in favour of old school?

Well, of course one doesn’t have to. I created a pretty simulationist modern system for my previous game, AZ: After Zombies. And here I am now creating an old school D&D setting. Unless you want to run the same campaign forever, you don’t have to choose only one, Highlander-style.

I like variety in my gaming, and for me that goes from a campaign angle, but also a mechanics angle. AD&D was the first rpg I fell in love with, and I really love how it feels. The classes have a special alchemy to them. At the same time, I love games like ICONs, I’ve recently been digging Savage Worlds quite a bit, and of course the BILT system that I created myself.

Can you give some examples of good OSR games?

I think my favorites are: OSRIC, ACK, B/X Essentials, and Dungeon Crawl Classics. Each brings something different to the table. OSRIC and B/X do a great job of modeling the games they’re based on.

Why does the City of Solstice work best as an OSR setting compared to the other style choices you had?

I think for a backs against the wall setting, where it’s the PCs against “the man”, OSRIC is a great choice. It has just the right amount of crunch for me. Also, a lot more of a character’s power in OSRIC comes from equipment. So by limiting the equipment and tinkering with the magic system, I’m able make the PCs more vulnerable, which reinforces their underdog status in the setting.

OSRIC also has what I consider to be the best power curve of any RPG. In many games (I’m looking at you 3e) high level PCs are superheroes. Due to some really “inside baseball” facets of OSRIC, high level PCs are not nearly as powerful. The power curve plateaus around 11th level. I have always thought that was a key strength of that system.

You’ve written more than 100 RPG products. How does City of Solstice compare to other projects?

Well, it’s a new experience for me in a few ways, mostly on the back end. It’s my first Kickstarter, and navigating these waters has been strange for me. It’s not my nature to open the doors on something before I feel it’s well and truly done. Yet here I am talking about the setting, and the mechanics, while things are still potentially in flux. So that part is a bit nerve wracking to me, but also exciting.

It’s a tough question, because when you’re in the thick of writing a book, it often seems like you’re just barely keeping your head above water. Normally I go through these struggles in private. The moment I decide the book is done, I will likely feel much differently about it than I do now.

This is Apocalyptic Games’ first Kickstarter. Depending on how it goes, what might you turn your attention too next?

This might be the toughest question to answer right now. When I released After Zombies, I supported it for several years, with 10 adventures, a rules supplement, and a monster book. I feel like Solstice deserves that same level of support. However, it’s not entirely up to me. First the project has to fund. From there, I’ve committed to no less than 6 adventures, 4 of which are part of the kickstarter itself. After that, if the demand seems to be there, I’d love to give it years of support.

The hard truth is you never know, because it depends on how the players out there respond. I’m an optimist by heart, so hopefully for the next couple of years it’ll be all Solstice all the time! Maybe I’ll expand on the city and create a continent next.

Free to Download: A preview of City of Solstice 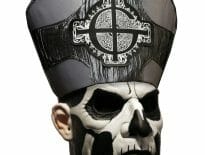 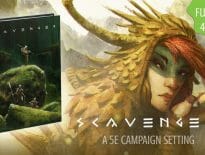