Maximum Metal and Eurotour: Danger & Death on a Euro-Rock Tour are two Cyberpunk 2020 games that have been out of print for years.

The Cyberpunk scene is changing. CD Project RED, the Polish computer game company responsible for The Witcher computer game, is planning on releasing a Cyberpunk game.

R Talsorian Games have responded by bringing their tabletop RPG range up to just before the computer game. Cyberpunk RED is the latest RPG and Cyberpunk RED jumpstart is already out.

However, there are generations of Cyberpunk fans before Cyberpunk RED. Now, R Talsorians Games has struck a deal with DriveThruRPG to bring high-quality scans of old Cyberpunk 2020 games back into retail.

As a result you can now buy Maximum Metal for military vehicles such as tanks, ground-support aircraft and tanks, and Eurotour: Danger & Death for Brit streetscum, French goldenkids, chill music and parties.

The books are scans. The original print copies have been scanned into a computer, turned into a PDF and offered up as a Print of Demand. 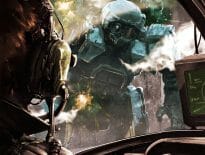