The BBC and Narrativia are turning Terry Pratchett’s City Watch books into a police procedural.

Richard Dormer, perhaps best known for his role as the Lightening Lord Beric Dondarrion in Game of Thrones, has landed the role of Sam Vimes. It feels like this is going to be a pretty quirky ‘police procedural’.

I’m so thrilled to be part of this brilliant madness and mayhem! I was immediately drawn to the multitude of layers to Sam Vimes, and I find the dynamic between him and his band of disenfranchised comrades very compelling.”

Adam Hugill will play Carrot and Jo Eaton-Kent will play Cherry. Hugill has more recently been seen in a relatively minor role in Pennyworth, the TV series about Batman’s butler.

Craig Viveiros will direct the show. He said;

The script for The Watch is like nothing I have ever read before. It’s anarchic, it’s noisy and raspy, and I am really looking forward to bringing it to life on screen. With such a talented line up of cast and crew together we can make something ground-breaking. 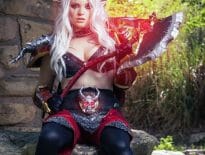