Okay, okay. I know the last couple of Irregular Reconnaissance have been surprisingly regular. It won’t last. Promise. We’ve just been catching up with the backlog while sprinkling in a few contemporary shows.

As a result of some of the last half-dozen, perhaps more, scout reports have provided mini-reviews for whole seasons of shows. It turns out you can do that.

As we progress, more often than not, the scout reports will focus on batches of episodes. After all, that’s one of the roles of Irregular Reconnaissance. It’s a chance to see what’s going on with the long-running anime titles and whether they’re still any good.

Got any recommendations of your own? Let us know in the comments below.

I stuck with Last Hope because I saw it had potential. It kept on nudging there, even in the final episodes it was getting better, bit by bit.

In the end, it’s a slightly intelligent, slightly alternative, mech-team anime. If you enjoyed part 1, then you’ll enjoy part 2. If you, like me, where a bit meh on part 1 and want to some pay off for hours you invested then part 2 might just do it. Maybe.

The last few episodes have some especially brutal scenes. Game of Thrones-style attacks to the eyes, except with slow-motion and x-ray views. Oddly, it’s pretty good.

The last half of season one (and I hope there’s a season two) puts the focus squarely on the life and death fighting tournament. We meet a host of improbable talents and watch them beat the living daylights out of each other.

But, but… there’s the politics and the betting too. There are parodies of famous firms and behind the scenes gameplaying. It’s clever stuff. Better than BAKI.

It ends abruptly, without a conclusion.

Season 1 introduced us to often naked muscle bound murderers. That was to let us in gently to season 2. BAKI ramps it up a notch!

There are still super tough violent thugs converging on the city because… well, that was never clear… but now the people who hunt those thugs are turning up as well.

There’s a bit of hetero-sex as well, just in case you wondered who the target audience for all these nearly naked monstrous men might be.

Status: Good, not as good as Kengan Ashura
Where: Netflix

Just when I thought Gridman was slowly becoming a bit like every other school-mech crossover, it pulls some curveballs on us. Nice one!

We start to get answers to mysteries, and while the first plot twists might catch you out, I doubt the ultimate one will. That’s okay, though, because by that time we’ve had plenty of giant fights and some touching scenes.

Got a friend who pretends not to like anime, but actually enjoys watching it? Then watch SSSS.Gridman together; I think it’ll give them license and courage to talk about the plot.

It’s early days for the much-anticipated return to the Dungeon. Okay, we don’t get into the Dungeon in the first four episodes as we get sideswiped into a dramatic side-arc.

We’re not talking filler content here. The opening episodes of Is It Wrong to Try to Pick Up Girls in a Dungeon sets out some important new rules, some compelling characters and shows us the bigger picture.

If you enjoyed season one then, based on the opening to season two, you should love the sequel. 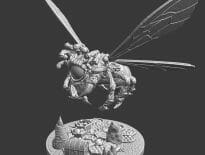