You are here: Home / Geek Stuff / Cool Tech / The Last Gameboard: Is this a board game evolution?

I don’t imagine anyone buys VHS any more, but I can remember a time when tape cassettes felt like the untouchable champion on Saturday evening entertainment.

Then DVDs came along. It wasn’t just that the shiny discs didn’t need to have a rewind button. They took up less space.

Then Netflix found a way to make it even quicker to get hold of movies and required less space.

That’s not to say that people don’t buy DVDs any more, though. I have some. I still have a few collectable steelbooks on my shelves, but for the most part, I’m entirely digital.

Could the same happen to board games? So many of the board games I buy have meeples and dice that I already have in many other purchases. The same is true about the gaming boards themselves; the only thing that’s different about many of them is what’s printed on the board.

It’s wasteful on my wallet, takes up space in my shelves and I doubt it’s terrific for the environment either.

The global gaming market is worth $137.1bn. That’s enough to motivate someone to try and bring digital to board games. That’s what The Last Gameboard are trying to do with Gameboard1.

This game board is a digital display. It can show whatever board game design you have in your library. How do games get in my account? It’s a subscription model, like Netflix.

The Last Gameboard is a 16″x16″ square display that can show anything it wants and it recognises when game pieces are placed on it. It can count turns, coordinate with multiple players and work with smartphones.

The team behind it is impressive, Shail Mehta is the CEO and Co-Founder, Mehta is a gamer with a history of working with hedge fund and Rob Wyatt, the CTO and co-founder, who has come from companies like Xbox, Magic Leap and Atari.

I’ve seen attempts to blend digital and board games before. Heck, I’ve got a copy of Golem Arcana in my cupboard which I don’t even I’ve even unpacked. I can’t think of a shining success story in the sector that’s ever really blended tech with board games. That team, though, I can quite believe The Last Gameboard team are well connected and can bring on partners all eager to try and bring their game to life for less than the usual cost of an expensive print run. In fact, the partner page is already live, with pricing, on The Last Gameboard site.

Wisely, there’s a Kickstarter coming. That’ll be the first test as to whether The Last Gameboard and its electronic library of games is a welcome expansion the gaming hobby.

If successful, The Last Gameboard will be more than a flat-screen you can play board games on. It’ll be a new category in gaming; the console board game.

Time will tell. Until then, I’ve questions. A lot of questions. Fortunately, co-founder and CTO of The Last Gameboard, Rob Wyatt, agreed to answer some of them for me.

Do you have any partners that you can announce yet?

The response has been fantastic, particularly among developers wanting to bring their physical and digital content to the platform. We’ll have a number of software and hardware partners to announce at the kick starter launch.

Why restrict this to board games? Have you considered virtual tabletops for games like Dungeons & Dragons?

It isn’t restricted to board games. Developers can make any game or content they want from pure digital board games to games that interact with physical pieces, cards and dice, possibly in ways we haven’t even thought of. For example, you could make an arcade-style game like air hockey or even a toddler game like a digital shape sorter with large-sized, brightly colored, physical pieces. The sky is the limit, if a developer can think of a novel use, we’ll support them.

It was a long path. Our early prototypes were 18×10 inches with the traditional 16:9 aspect ratio and our early development was targeted at board games of which most are square, if you place a square board on a 16:9 screen you end up with a lot of screen real estate being wasted. Another issue that cropped up with the 16:9 screen is notion of a top and bottom, it felt different depending on which side you sat and it became apparent very quickly that the screen had to be square.The screens are custom made so we could make them any size we wanted and from the point of view of a board game the ideal size would have been around 20×20 inches which is in the ball park of a typical board game. However a custom screen at this size was going to be really expensive, really heavy, consume a lot of power and require substantial structural support from the case to prevent it from breaking. 16×16 came about as happy medium and its still very close a real board game size and 4 people can comfortably sit around it.

Can you tell us a bit about the active pieces?

Most of our pieces are actually passive and require no batteries. We can detect the location, orientation and type of piece when they are placed on the board. The pieces themselves store about 2K of encrypted data, some of this is read-only and contains vendor and product info but a lot of the storage can be used for user data. This opens up a whole new category of play because for example a wizard piece could build XP and store it in the piece. Therefore, the capability of a given piece can change over time. You can take your pieces to a friends house and keep your XP without anything being stored in the cloud.
Active pieces do contain a battery and electronics. These pieces have two-way communication with the game board and could have buttons for additional user input or incorporate any number of other sensors, even communication with your private screen. For example, you could cast a spell from a private screen, the active wizard piece would glow and pulse and the light show could transition to the pixels on the screen as the spell radiates out. Active pieces enhance what is possible in terms of interacting with users or even the environment. All of these new mechanics allow us to enable gameplay and game styles far beyond what’s possible with a traditional digital game board.

We’ll provide generic bases which act as passive pieces and users can 3D print their own pieces to sit on the base allowing prototype games to interact with physical pieces. These generic bases, after being configured, can also be used for users who want to use existing game pieces – maybe they have an expensive chess set they want to use with the game board.

How do dice work?

When we speak to game players there are two very clear groups when it comes to dice. The first group are usually more causal and enjoy the process of rolling the dice because it’s social; it’s fun; it means it’s your turn. These people very much want real dice. The second group are typically more hardcore and they very much look at the dice as no more than a way to randomize the game. This group would be more than happy to only use digital dice. In order to accommodate both camps, any game that uses dice needs to have a digital version of that dice but physical dice are supported for the players who want to use them. The always present digital dice mean you can travel with the board and not have to use physical dice. We have a nice system for digital dice where a player has dice on their phone/private screen and the player can shake the dice on their phone and roll them digitally on to the game board. In order to support physical dice, we developed a machine vision system that will allow any existing dice to be used. There needs to be nothing special about the dice; they don’t have to be registered; they can be made of any material, any color, any number of sides and we can read multiple dice at once. Custom games can have custom dice and the developer can provide template data to our vision system to explain how to decode the sides. We are also working with partners who are making bluetooth dice and we fully support them. In total there are four ways of supporting dice: digital dice on the game board, dice from a private screen, physical dice with machine vision, bluetooth dice.

It’s early days, I know, but any idea of how long the battery lasts?

In our current design, we are aiming for 4 hours of battery play. However, this is a variable we can easily change because we have a 16×16 screen there is a lot of space in the case. We also haven’t ruled out a range of different batteries, user-replaceable batteries and aftermarket second batteries that have more capacity.

Do you need to be connected to play?

No. A lot of effort has gone into the user experience. When you aren’t online, we want people to use this in the same environment they would use a traditional cardboard board game. Obviously, you can’t play online and you can’t download new games but any games you have installed you can play completely offline with multiple local players.

The Last Gameboard: Is this a board game evolution? 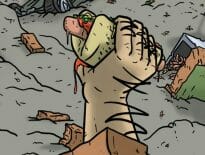 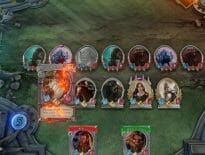