You are here: Home / Games / Tabletop & RPGs / How to find an LGBTQ+ creator in the tabletop industry for your next project

If you’re looking for an LGBTQ+ creator for the games industry, then Meredith Gerber and Joseph Carriker have helped you out. Over on Medium, there’s a handy list. Everyone who appears on it is there because they asked to be and anyone can ask to be added.

What’s the purpose of this new resource?

So, during Pride Month, I try to give money to LGBTQ+ creators. I asked around for a place to find people that I could support, but everyone gave me the same answer.

“XX person did a list on Twitter”. But, the problem was, navigating that is incredibly difficult because these lists get buried.

I went to Joseph Carriker (@oakthorne), who is someone I trust and absolutely believe could find such a resource. But, he didn’t have a resource either. After chatting a bit, I asked if he would help me create a resource that could be updated consistently. We had rules, of course. We wouldn’t add anyone who didn’t give us explicit permission to add them to a public list. I started out adding people as quickly as I could across multiple social media platforms and this caused a few errors in the data so now, we only update it once a month through a survey to collect said data. Joseph helps curate the list and make sure the people submitting are actual humans and not robots and handles most of the communication on social media.

There are four purposes.

One, to celebrate the amazing works from the LGBTQ+ community in the industry. Two, to be used as a resource for people looking to hire a more inclusive staff. Three, for people to support and purchase their products. Four, for other creatives to just network and connect with one another.

Does it reflect poorly on roleplaying as an industry that such a list is needed in the first place?

I think that the industry is evolving where LGBTQ+ creators are becoming more and more supported in the community, which is great. The problem is the amount of work you have to do to get to said creators. Finding someone who not only matches what you want but also is LGBTQ+ can be a long process. I have hired LGBTQ+ artists for commissions before and it is trial and error in going through their various social media platforms. You run into a lot of issues between not hearing back from creators because they don’t use that platform anymore or not finding their contact information easily or a variety of other roadblocks to hiring someone. It is heartbreaking when you fall in love with someone’s art and they can’t be contacted or their information hasn’t been updated.

I think it’s less a poor reflection and more so that is unfortunate that such a resource didn’t exist to make it easier to find LGBTQ+ creatives. Now, developers or customers or writers or other creatives can go through a single page, click through various portfolios, and find the person they are looking for without diving through various social media platforms and trying to track them down to hire them. I hope that we someday see lists for more groups, honestly.

Should gamers or publishers ever worry about positive discrimination?

The idea of positive discrimination is favoring a group that has been discriminated against previously, but I don’t think that’s what happens here. Is there such a thing as too much diversity? No.

I think more so that this is a call for positive action. This resource isn’t to say you have to hire every single person on this list and every person on your team has to be someone from a marginalized group. No one is forcing you to exclusively hire people in the LGBTQ+ community, people of color, or anyone who isn’t a straight white person. But, with positive action, you are opening yourself to more diverse options that can bring in brand new and beautiful voices to your game line.

I know some designers might be worried about pushback from their community about positive action but hiring people from marginalized groups is the right thing to do. People are going to complain about designers’ choices, no matter what. To quote someone I adore in the industry, “If you put a $100 in every single one of your books and gave that book away for free, someone is going to complain about how it was folded.”

Making your every member of your team diverse is not a requirement but it is something to strongly consider even if it’s adding a handful of people from marginalized groups to your lineup.

If I was looking to add books to my RPG collection which had been worked on by members of the LGBTQ+ community, which would you recommend?

Oh, that is a loaded question! There are so many good ones. Just a few suggestions off the top of my head:

This is not at all inclusive. There are so many good books out there.

You were lucky enough to attend the Origins Game Fair. What were your highlights?

I love Origins. It’s one of my favorite shows to go to. I actually played games this time! I was lucky enough to play Reliquary Games’s Clockwork Dominion which was so much fun. I played a round or two of Deathwish and I was able to demo a lot of new and upcoming games, too, which was great.

Also, my friends and I do a weekly game of Overlight, so we were able to snag the new GM Screen and got a free adventure from Renegade Studios for Free RPG Day!

This is fantastic! My partner has been working on something similar in her own (non-gaming) community. 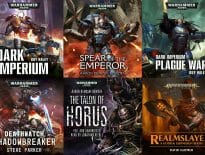 Books Over 766 hours and counting! A colossal treasure t…