Welcome to this issue of Irregular Reconnaissance and another anime round-up. It’s the 38th anime wrap up, in fact, which means in terms of wedding anniversaries we are in between coral and ruby. That’s beginning to sound like Pokemon game titles so let’s leave those there and move on.

This issue is a somewhat mixed collection. There are some new classics as we catch up on 100 episodes of Boruto, but then some slice of life shows that are struggling to make their mark.

Have you caught any animes recently which you think are better other people are saying or which deserve to be more popular? The genre seems to be full of great undiscovered titles, and that is a terrible shame. Let us know in the comments below or pop over to the Geek Native chat portal to find conversation elsewhere on the site.

Now, on with the round-up!

How could anything follow on from the great legacy that was Naruto? As it turns out, Boruto: Naruto Next Generations does a superb job and even addresses how hard it is for the character Boruto to live in the village in which his father is just a huge figure.

Some of the characters are familiar in this anime because they are the children of favourites from the previous show, but there are some ‘brand new’ ninjas in training too. It’s these new families that get some of the early limelight which might lure you into thinking that they’re going to retain that attention.

The ending of Naruto, in some ways, sprang unexpected cosmology onto us in what some felt was a less than satisfactory way. New characters seemed to come out of the blue. We hadn’t invested in them as the audience at all. That can’t be said for Boruto, and the show goes straight there, underlining the new dangers and just how much power these new villains have. Then, once that’s established, we take a step back and effectively re-start as Boruto goes on his own journey of self-discovery, much as his father did before him, on his way to becoming a memorable warrior.

Most importantly, the showrunners seem to have learned what worked best and least well in Naruto and they’re skipping the mistakes to dish out only the successes for Boruto. I’m enjoying it more than I feared I would.

There are shades to Lost about this show. Our heroes find themselves stranded on an island, there are weird monsters and old complexes around. Then they find out they’re not alone.

Unlike Lost, though, there’s a backstory that makes anime-sense. These teams of people have woken up after the end of the world. Our survivors were stashed away, without their knowledge or consent in some cases, in cryo pods and hidden deep underground. The computer systems have now decided it is safe to revive them.

I’ve mixed feelings about the show so far. It’s an interesting setup but we’re stuck with some of the most annoying characters I’ve encountered for a while. I’m rarely won over by the simpering teen who lacks any self-confidence.

Status: In danger of being dropped.
Where: Netflix

It’s a fashionable set up as a geeky guy gets himself killed trying to be a hero and wakes up in a game world. There’s an interesting twist though; it’s the goddess Aqua who is responsible for giving him this new life, letting him keep his memories and pitting him against the Devil King. When she offers him one thing to take with him on his new quest, a weapon, power or something like that, out of spite, he decides to take her. Hijinx ensue.

There’s no shortage of fan service in Konosuba, and at times you might not even be sure what type of anime you’re watching, but there are just enough twists and turns to keep your attention for a little longer.

I watched a few episodes in a row and then never found the time to get back to the series. There are better options out there, but the adventures of Kazuma and Aqua are still bookmarked, and perhaps a catch up is due.

Status: Not a priority
Where: Crunchyroll

My First Girlfriend is a Gal

‘Gal’ seems to be the colloquial term independent and assertive woman with a bold fashion choice. I suppose the phrase “ladette” is the closest match I can think of using my local Scottish lingo.

So, this is an anime about dating a sexy ladette.

I watched this on Crunchyroll, and they or the original animators deployed little floating hearts and the like to censor some views. In some ways, they make scenes more obscene than they needed to be. Not that any scene was particularly lewd, it’s just that there were random upskirt shots designed to remind the audience just how drool-worthy these gals are supposed to be.

At its heart though – and here comes the twist – My First Girlfriend is a Gal reminds that us no one is an object. We’re more than our bodies. You can look hot but still be smart and intelligent.

Whether My First Girlfriend is a Gal actually manages to tell anything close to a profound story, though, is in doubt. It may just have been a better ecchi comedy than most.

Gamers! is billed as a slice of life comedy and starts when the most popular girl at school talks to a geeky guy about games. Guess what; she likes games too?

Incredible, I know (note – sarcasm present). The show is based off the light novel which started in 2015, so the concept of women who enjoy computer games really should have been firmly established.

However, Gamers! goes on to establish the popular blonde as none-other than the president of the Gamer Club and our ‘hero’ Amano Keita finds himself inducted.

If the anime was going anywhere with this setup, I didn’t see it after three episodes, so I put it down.

This is not the only anime in this round-up in which a geek finds himself transported from our world to a fantasy one with his memories intact. In Knight’s & Magic we have magic powered mecha as a feature to set it apart from others in the genre, and it works.

Our programmer is re-born as a silver-haired young upstart and with his modern-day skills, and gaming knowledge can help re-engineer the mech-knights into bigger, better and faster warriors. This is just as well as soon kingdoms are at war and all sorts of previously unseen mech creations are being thrown at the heroes.

There’s nothing remarkable about Knight’s & Magic – apart from that apostrophe – but it’s a solid fantasy show. If you’re usually a mech fan and want to watch a new twist on that genre, then give this a go.

That’s a wrap for this scouting report back from the weird and wonderful anime world. Have we covered any shows you’ve seen and have thoughts about? Let us know. 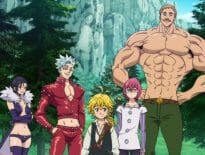