You are here: Home / Games / Tabletop & RPGs / What the heck is a tactical RPG? Zafir launches strongly on Kickstarter

The Zafir: Tactical Roleplaying Game from Zafir Games is asking for $22,000 on Kickstarter and has got off to a strong start. In the first day, Randy Knapp’s game has raised over $6,500 from 126 backers. You can keep track of its funds at the campaign counter.

The tactics referred to in the title are all about the combat. Zafir blends in elements of skirmish games into the RPG so that fights are less abstracted and more precise, forcing players to think more carefully about their actions.

Zafir isn’t just about minis and tactics on the battle mat, though, it’s also about diversity and inclusivity. It’s not mentioned at all on the Kickstarter campaign (although of the three revealed iconic characters; two are ‘she’ and one is ‘they’) but the concept of ‘inclusivity-focused character creation and progression‘ is a significant part of an accompanying press release that went to media outlets.

Inclusion is incredibly important to me. I know that I’m a cit-het, white, male, middle-class American; I’m highly privileged. So it’s imperative that in my games people of color, LGBTQ folks, disabled folks, and women take center stage. A focus on inclusion means that more people see Zafir and see people like themselves. Representation matters.”

The stage in question is a middle-eastern inspired world that’s about to erupt into war. Technologies in Zafir are close to our 1930s but rather than oil and coal, magic and spirits are used instead.

There are still about half of the early bird slots (at the time of writing) which will get you a PDF of Zafir and a set of Gods and Iconics stickers for $15. The early bird hardcover, $40, is about to sell out.

If you miss those early birds, then you’re looking at $20 for the PDF and stickers (Zafir may come to regret not giving themselves an electronic-only fulfilment tier) and $50 for the book, stickers and PDF combo.

You can go higher. There’s are special editions and beta access, but those start, with early bird discount, at $90.

Randy Knapp and Zafir might not be gaming household names, but he’s put a strong team around him, and he’s ten years experience in video gaming. Peal Dean, for Paranoia and Shut Up & Sit Down fame and Matthew Medina are involved in the narrative design.

What the heck is a tactical RPG? Zafir launches strongly on Kickstarter 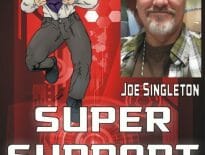 Tabletop & RPGs Joe Singleton fundraiser: $150 worth of RPG for $…