You are here: Home / Games / Tabletop & RPGs / The Umbrella Academy card game due to Kickstart in 2020

Studio71 Games, the company that helped with Joking Hazard and coordinated the Kickstarter for Binding of Isaac: Four Souls, has a deal with Dark Horse.

We are incredibly excited to partner with Dark Horse Comics, Gerard Way and Gabriel Bá to bring The Umbrella Academy card game to fans next year. We’ve all been ardent consumers of the comic book series for years and are looking forward to launching the game. At Studio71 Games, we are passionate about building brands with long tail through a combination of premium expansion products as well as fan engagement across platforms, proprietary data analytics and out-of-the-box marketing,”

Studio71, who are part of Red Arrows Studios, and therefore linked to some pretty big YouTube stars (like Lilly Singh and Rhett & Link) describe themselves as a key disruptor on the games industry. They cite that network of creators as a source of intellectual property. Interesting, then, to see them turn to a comic book publisher like Dark Horse to go after The Umbrella Academy.

It’s only speculation, but they may well have been approached by someone with an excellent idea for an Umbrella Academy game, and they are confident enough in the concept that the business case was strong enough for them.

What Studio71 Games does with data analytics that’s proprietary and what they do with out-of-the-box marketing isn’t clear. However, Dark Horse’s comment on the partnership includes a reference to their retail strength, so perhaps that’s it.

Studio71’s previous success with game design, blockbuster Kickstarter campaigns and strong retail relationships make them an ideal partner for us.”

The Umbrella Academy card game due to Kickstart in 2020 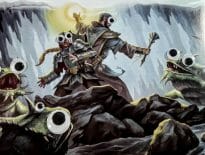 Art Ghosts of Saltmarsh get the googly eye treatment 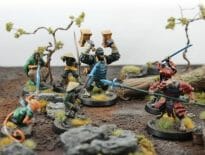