You are here: Home / Books / Could you survive longer? A review of Outland

Outland by Dennis E. Taylor is a mix of Primeval and Stargate with a whole bunch of twists thrown in. That’s a mix that works for me.

“Could you survive longer?” The title of this review comes from the challenges the young group of would-be heroes face and their repeated observations that characters in TV shows and movies seem to suck at basic survival. Hanging a lantern on the situation; Taylor’s characters will leave you in no doubt of their struggle.

As it happens, I think Taylor’s troupe of university students do exceptionally well. All their choices make sense; logically and emotionally, even if their ability to remain calm during extraordinary events is impressive.

The flipside to that is the lack of surprises. I don’t mean that negatively. I mean listeners are already wondering what might next and doing so from a position of knowledge. For example, if the characters are being sneaky, you know there’s a chance they’ll get caught. You won’t be surprised when they get caught. You are, however, disappointed and worried about the fate of this (broadly) likeable youngsters. Getting caught is a twist, it wasn’t a surprise.

It also helps that our would-be survivors are prone to geek culture references. This is a book written with a geeky audience in mind and its certainly no hardship to read about geeks doing well. Geeks with hot boyfriends and smart girlfriends. Geeks that are faced with the ultimate form of escapism – Outland.

For me, as a geek, one of the attractions to Outland was the license and what if scenarios. I’ve no idea how accurate Dennis E. Taylor’s vision of the world is, or even of his science, but it all seems plausible. That’s important when we get into realms of technology so advanced that it feels like magic (like in Stargate). There need to be rules to it. The curse of deus ex machina is loud without them. At no point, even as the pace picked up and the science ramped up, did I feel as if a magical McGuffin would be wheeled out of the blue to save the situation. For this; I am delighted.

Another unexpected highlight are the news broadcasts that sometimes pop up in between chapters. The style works very well for the audiobook, and it was with these news broadcasts, these insights into what is happening in the world, that we kept up with the bigger picture. It was only once I had finished listening did I release how important that contextual understanding was.

This feels like a good time to talk about the narrator Ray Porter. He has a range of voices to find, as there’s an ensemble cast of characters, and does very well. I could tell characters apart as they began to speak. Porter also narrates the Bobiverse series from Taylor so you may already be a fan. I’d heard him already in The Singularity Trap, noted how well the radios and tannoys worked in that story, and this is more of the same. It must surely help that Porter is familiar with Taylor’s writing style.

There’s to a lot to like in Outland. I’m going to classify it as easy listening. It’s an audiobook to commute to, or wandering around the neighbourhood playing Ingress too, or stretching out over the sofa while enjoying a large glass of brandy. You don’t need to treat it with scepticism and scrutiny, just sit back, accept the proposition and enjoy.

It’s worth an Audible credit.

Could you survive longer? A review of Outland 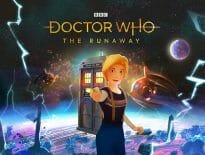 Online Shows The Runaway: The BBC release a VR Doctor Who exper… 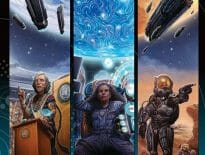