Steven Anderson is a Glasgow based graphic designer who shot to geek fame through his awesome treatment of Mr Men as super heroes and villains. The sample of Steven’s art on Geek Native has been one of the blogs most retweeted URLs in months and so I cheekily pestered Steven for an interview. Hurrah! He agreed.

Q: Mr Anderson reminds me of scary questions from the Matrix. Think I can get a way with calling you Steven?

Sure, I actually used to have a flatmate that would call me ‘an infectious disease’ in an Agent Smith like drawl – she didn’t really like me, or at least, my approach to the cleaning rota…

Q: Where does the alias Seven Hundred come from?

I honestly can’t really remember, wait that sounds like i’m covering up something… I can remember that my mate and I were trying to come up with a cool avatar for Half-Life or something, and Seven is a bit like Steven, then I think we just added the Hundred bit to make it seem a bit more… well, just a bit more really. I’ve used it for years and probably had a whole story at the time, but that bit of useless information has been pushed out by something even more useless. I still like it though.

Q: Your Flickr profile says you’re a professional graphic designer. Can you tell us a little more? Do you work in digital?

I work as a graphic designer for a big company in Glasgow that i’m saying very little about, just incase I accidently get myself fired through some series of unfortunate events. I mainly work in digital, Adobe Illustrator, Photoshop, the usual ones. I consider myself an adequate amatuer, tho my c.v would say differently, and can normally get the stuff on screen to look pretty much like the stuff in my head. Nothing beats doodling on a post-it with a nice new Sharpie tho. I’m trying to get my head round Cinema 4d and the like, but I prefer doing 3d work with Plasticine and Fimo rather than a mouse and keyboard.

Q: Do you have a website? What’s the best place to keep up with your art work?

I’m still trying to learn Flash and website building to get my own site up and running, but this could take a while. In the meantime, i’ve set up a facebook group for my t-shirts, and i’m on all the usual web places, twitter & facebook. Flickr is probably the best place to peer over my e-shoulder and see what i’m working on artywise.

Q: What sort of art do you like? Who’s been an influence on you?

In terms of actual artists i’m not really sure, i’ve always really like Roy Lichtensteins stuff, the idea of redrawing (albeight gargantuan) somebody elses comic panels and reselling them really appeals to me : ) I really like Skottie Youngs stuff – his marvel work has a nice retro feel to it and is usually quiet lighthearted and humerous. I tend to draw most of my influence from bits of my childhood, 8 bit graphics, films, tv that kinda stuff…

Q: What about other web based artists / graphic designers out there that you’d recommend.

Travis Pitts aka Dr Monster – does incredible stuff. He’s a freelance illustrator with a fixation on robots/monster/zombies and other cool stuff flickr.com/photos/zom-bot/

Brock Davis – Wicked ideas man, with the talent to see them through – flickr.com/photos/laserbread/

Q: How much of a geek are you? Care to name any of your favourite books, graphic novels, TV shows or films?

I consider myself to be a geek, but then i’m not really sure quite how geeky i am? I’m more of a current geek i guess. I would quickly find myself out of depth discussing G1 Transformers or the ins and outs of the Marvel Secret Wars and sometimes i feel abit overwhelmed in Forbidden Planet… So, I dunno, I look like a geek, but cut me in half? I’m not sure you’d find geek written through me. Ughh, how’d we get on to cutting me in half…

Favourite books and stuff? – I used to really like the Discworld series, particularlly the ones focusing on Vimes and the Guards, but i haven’t really been keeping up with the more recent ones… I’ll need to look some of them up.

Graphic Novels – I’ve just started reading Scott Pilgrim – and was stoked to see that Mr Sillys shoes make a cameo apperance early on. I wasn’t really that interested in it, then I saw the trailer, and it looks ace… In terms of Marvel stuff, I find the actual storylines way too huge to even begin to know where to start. I do really like the reimaginings tho – i’m familiar enough with most of the mainstream characters and plots, so i really enjoyed the Marvel 1602 and the Marvel Noir stuff. I also like the Marvel Fairy Tales even thou I suspect i might be the wrong age/gender/audience for them. Speaking of reimaginings, Red Son by Mark Millar is absolutley incredible, with an epic twist at the end – most of my workmates still think comics are for kids, but bring up Red Son and start mentioning Russia, Communisim, and Stalin and it causes them to gulp and back off a little, plus the design of the Russian Batman(Batmanoff) is worth looking it up for alone.

I really love Y the Last Man too, it’s a great idea and i really hope they decide to make an HBO style TV series out of it rather than a film. I’m starting to waffle here, so here’s some more in a one word answer style… Preacher, WE3, Pride of Bahgdad, Powers, The Last Christmas – a must read at the start of every December.

Films – Kick-Ass was excellent, not as violent as I had wanted, but i’m hoping for an ultra-violent DVD special. Nic Cage was excellent in it. District 9 is an amazing movie, I like the kinda video-game feel it as to it, with the weapons and power suits. Okay, more one word answers – Watchmen, Brotherhood of the Wolf, Things to do in Denver When Your Dead, Back to the Future Trilogy (natch), Star Wars – all of ’em… oh yeah, and i’m stupidly excited for Iron Man 2.

TV – The Big Bang Theroy is brilliant, reminds me of when I shared a flat with my elite gaming buddy, ‘cept we didn’t have a hot next door neighbour. Plus Sheldon has great t-shirts, hopefully if I mention SHELDON COOPER T SHIRTS and link to my webstore – I can score me some more views and sales : )

Star Wars the Clone Wars is always great sunday morning viewing, some of the storylines are a bit daft, but I really like all the little nods and winks to the main films.

Heroes has gone downhill abit of late, but i’m still sticking with it.

My girlfriend and I are nearly done with The Wire, and thank god, it’s lived upto the hype. It’s an incredible programme, such great characters. I know there is a running battle between it and the Sopranos for the title of ‘Greatest TV Series Ever’, so far it’s a tie, but the Sopranos failed in delivering the end, i’m confident the Wire will have a better ending and take the title for me.

Q: Just have to ask about the Mr Men and super hero mash up. Where did that idea come from?

I was all excited for Watchmen coming out, and then it just hit me – the similarities between the comedians smiley face badge and Mr Happy. I thought it’d be fun to have his innocent beaming face with the big bloody smear across it. This led on to the line “Who Watches the Mr Men” and when I posted it up on flickr, it seemed to catch on so I kinda figured I should fill out the cast with Mr Men. Mr Strong was an easy match up for Dr Manhatten, tho i did consider Mr Impossible – but he’s just not well known enough I don’t think. I knew Rorschah was goin to be Mr Nosey, the nosey bit was just too good a link to miss. I never liked Mr Uppity – so he became the villain. Nite Owl became Mr Clever based purely on the googles/specs. Silk Spectre has that great line ’bout goin’ out and gettin’ into trouble – so she became Little Miss Trouble. I kinda got a little bit hooked on it, but it was fun.

After doin the Watchmen characters, I thought it’d be fun to create my own Superhero Mr Men. Again, the realisation that Batman would wind up being Mr Bat was what kicked it all off. His iconic mask/ears combo worked really well as the simplified shape that Mr Men seem to be based on. And again, it was good fun taking characters from the Batman universe and stripping them down to a simple shape or personality trait and creating a Mr Man style illustration of them.

It’s pretty much the same story with the Marvel one, although I tried to sneak in a few stupid visual puns, my Little Miss Scarlet/Scarlet Witch is based on a witches hat shape, Mr Hawkeyed is an arrow shape and Mr Apocalypse is a big angry mushroom-cloud shaped guy. I think my own personal favourite is Mr Thingy, he’s just a big orange oblong but still looks tough with a bit of a ‘hrmph’ expression… I also set myself the challenge of making all the Fantastic Four characters four sided shapes, again it was just another daft little touch I wanted to sneak in.

Q: What have you got planned design-wise for the future?

Well, i’ve still got a few Marvel characters I want to Mr Man up, and I’ve got a plan to do some retro style distressed T-shirt designs. Featuring a more kitschy Batman and Wonder Woman, they’ll be based more on the campy TV series versions than the graphic novel/movie ones. Plus I might do a few limited edition T-shirts round about hallowe’en… *shameless plug alert* join my facebook group to stay informed.

I’ve also got a few other half finished ideas I want to wrap up – an Aliens/Space Invaders mash-up (Game over man, Game Over!) I want to get on a T-shirt and a Super Mario bros/Star Wars combo that I need to do something with – it’s got StormTroopa Koopas and Imperial Goombas : ) 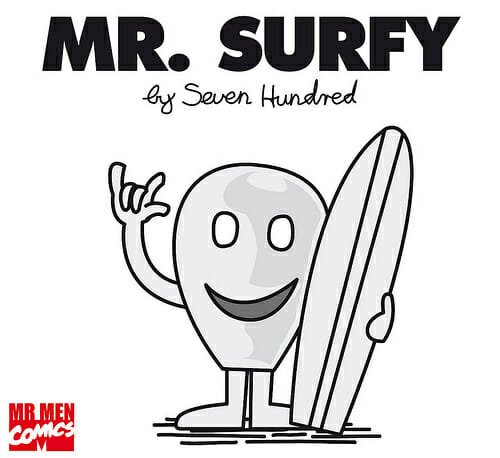 i know them all 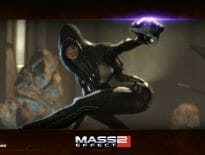