You are here: Home / Games / Tabletop & RPGs / Instantly generate a whole culture for NPCs in your fantasy RPG

Sometimes as a busy DM or GM you will have to make up an NPC on the fly. It could be that a player asks the shopkeeper for their name and you have to wing that. There are also times when you have to ad-lib a more significant character and, with practice, this is a skill that develops.

But what about making up a whole culture on the spot? Or, if you’re world-building, and are looking for some filler information for histories or an obscure corner of the world, is there a quick way to generate a whole fantasy culture?

There is: Iron Arachne’s Culture Generator.

This culture is called the Bakudu. Its people are the Bakudulese. They speak a abrupt language called Bakudulese. It uses an ideograms writing system made mostly of arcs and loops.

The site then generates lists of male, female and family names. In my Bakudu culture, I could have Dalan Gefduthpoter or Kolan Dusgardul (male) or Dapua Tethkorti (female).

I know the Bakudulese music is melodic and that they commonly use lyres, lutes and flutes.

The Bakudulese originated from rainforests, and this is still represented in their clothing which consists of short tunics, pantaloons, skirts and sandals or light shoes. They tend to dress in subdued yellow and pastels while using either light linen or light wool.

The culture generator goes on to give examples of typical food and drinks (curried bananas with salt are popular for my Bakudulese).

Lastly, the website whisks up a whole pantheon of gods. The first deity mentioned in this random generation is Ghuzghepiret. She’s the goddess of travel, time and wisdom. The ‘relationships of the gods’ section finish out the generated culture, and in this case, I read that Ghuzghepiret loves Taguet the goddess of summer.

Your random culture will be different from mine, and you’ll discover that the generator doesn’t just pick words out of nowhere. There’s a consistency to the culture that keeps everything believable even if the suggestions become exotic (like curried bananas with salt).

The downside? You can’t save any of your cultures. One single page refresh and everything is gone. So once you have a culture that looks about right take a screen capture of the screen or a generous Select All – Copy – Paste into a notebook.

You can play with the generator yourself at Iron Arachne.com.

Thank you! I solved that one. The developer moved the culture generator, but I’ve found the new home and updated the links.

Note that you can save cultures now!

Instantly generate a whole culture for NPCs in your fantasy RPG 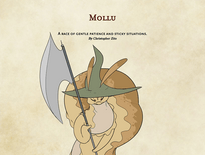