The codeveloped adventure story that matures when playing fantasy role-playing games is an engrossing experience. The game offers participants the possibility to both ‘read’/’write’ contextually in the shared narrative. Despite the collaborative nature, it is the Game Master’s (GM) responsibility to be the main driver in the story’s design. The GM must steer the direction of the adventure while adapting to the unforeseen inputs from the players. Often, but not always, the GM has a few scratchy notes or runs the adventure from a module that aids in the story’s structural design and execution.

Good adventure design is essentially a structured story that captivates the audience. And story structure is in its most straightforward nature a sequence of events placed chronologically by the designer. That leads to the fundamental idea that stories have topologies and shapes that we can modulate.

We can re-arrange the event sequence and allow non-linear paths to change the narrative shape of the adventure. Alternative interpretations of the adventure are facilitated by removing or adding narrative paths between events. In other words, the story structure has an important impact on how the adventure is processed, perceived and played.

Narrative text as contained in adventure modules can be viewed as network graphs. Each node in the network would then represent an event of the story such as an encounter or location, whereas the narrative extensions to other nodes are the most likely paths between events.

Narrative paths between nodes in an adventure context are not directional, and backtracking would be fully allowed. Understanding the properties of the story graphs can be quantified mathematically, but visualisation is often sufficient to compare our stories to the intended design.

When looking globally at story structures common and repeated patterns of 5-node building blocks appear. From a pure combinatorial point of view, there are more options available, and one could increase the complexity by dissection to 4- or 3-node structures. The recurrent 5-node building blocks are called bus, tree, star, ring, ring-mesh, and mesh and they are defined by the path structure between the nodes. The inherent characteristics of these smaller building blocks can be quantified using network theory with calculations such as density, summed degree of vertices, distance diameter and degree of centrality, and by combining these measures, we can get an idea of the impact each building block confers to the overall story. The ease in which to move around in the story is clearly dependent on the diameter of the network and how well the structure is connected.

Similarly, the ability to pace the story is most straightforward when there are limitations to available paths. On the other hand, decision making and player agency would be expected to be dependent on the overall number of narrative extensions and how well connected each node is.

Most adventures contain several of these building blocks to create an amalgam of story consequences. Parts of the story may be linear, and parts might be highly connected. It might, therefore, be prudent to tinker with adventure designs with a network theory mindset.

Although the structure of the story affects the narrative experience, it would not relinquish player agency or the ability to both redefine the narrative extensions nor the identity and content of the nodes in the adventure. The emotional buildup and cathartic resolution would be utterly depended on the identity of the nodes (social, exploration or combat) and the willingness of all participants to engage with the story. Network graphs offer adventure designers and content creators a vocabulary and a framework for the depiction of story structures before the players throw a wrench into the mix.

About the author:
Christian Toft Madsen is a freelance writer of D&D adventures and shorter pieces of storytelling goodies. He started as GM over 30 years ago and never migrated to the other side of the screen. His channel combines D&D insight with loose ramblings about tabletop roleplaying games.

Creative Commons credit: Ezekiel, Keeper of the Book of Salvation by Sarp Cebeci. 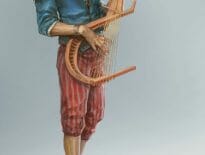 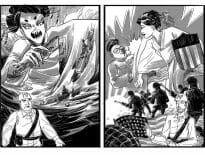