Could a gelatinous cube look after your dice? Whimsy Works thinks they can and are asking for Kickstarter to make it happen. At the time of writing Lord Gerlbert Jellington has just funded, pushing past the $4,500 asked for. You can follow the campaign progress here.

At the time of writing, if you’re super quick, you can get a Lord Gelbert for $25. There’s a catch! We’re asked to get in touch, if you’re international to find out what P&P rates are before backing. However, the campaign does have international shipping rates for US, Canada, UK, Australia, Poland, Brunei, Singapore and Germany published and the price never goes above an extra $15.

If you don’t get the early bird, then you only need to step up to $30 to get the plushie dice pouch. If you’re a FLGS then there are tiers available for you to get more than one bag if the Kickstarter successfully delivers on its promise.

Lord Gerlbert Jellington will measure 5.5″ x 5.5″ which is enough to hold two sets of dice. This ooze will be made out of ‘minky fabric’ which we assume isn’t actually mink and can come in a series of colours.

There’s a stretch goal that unlocks at $9,000 which will allow backers to go for the cute but deadly goth ooze Gellian Jigglesbee instead. 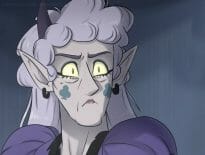