You are here: Home / Games / Tabletop & RPGs / A post-historic age RPG: The Chronicles of Future Earth

Sarah Newton’s Mindjammer RPG is one of the most popular transhuman games out there. That’s a sci-fi set so far into the future the concept of ‘human’ has changed (and that’s a description so simplified it’s almost criminal). What’s post-historic then? A question that’s only important as Newton’s current project happens to be The Chronicles of Future Earth, a post-historic RPG. The Oxford English Dictionary gives the US English definition as “Of, belonging to, or relating to post-history existing or occurring in an (imaginary) epoch of the future”.

If you want to learn more than check out the Kickstarter campaign here, which launched today and has nearly funded. Alternatively, pop over to DrivethruRPG to download The Swallower of Souls, a quickstart adventure for the game, entirely for free.

As it happens, you can unlock your first deliverable with only a £5 pledge. This reward isn’t the game but the ebook The Worm Within, fiction described as The First Chronicle of Future Earth. Mindjammer also had novels and with a name like ‘Chronicles of Future Earth,’ a series of books in support of the setting seems like a logical, if high effort, move.

It’s £40 if you want a print copy of the core book that comes with the ebook as a bonus.

That’s not where most backers are going. There’s a time-limited early bird called “Master Chronicler” that’ll set you back £80 (about $105). This tier gets you the the print version of The Chronicles of Future Earth RPG, GM screen, a map of the Springtide Civilisations, a bag of 4 Chronicles Dice, 25 Chronicles of Fate Tokens, Tower of Virigu, Player’s Folio and Feature Cards when/if they unlock as well as The Worm Within and any other PDFs that unlock with stretch goals.

The game will be a 244-paged and full-colour hardback. It uses a modified version of Fate.

Newton’s post-historical vision is a far future filled with sorcery and demons, ruins of long gone civilisations and ancient technologies. It’s our Earth some 100,000 years in the future, and a new, final, enemy is approaching.

The Kickstarter campaign needs to raise £12.5k for the Tower of Virigu to unlock, £15k for the Player Character Folio, £17.5K for an expansion to the Tower of Virigu, £20K for a boost to the core rules taking it up to 388 pages, £22.5k for a pack of feature cards and £25K for the adventure called Wormhollow Vale.

The best way to get a feel of the game has to be to grab the free to download The Swallower of Souls adventure and have a quick scan.

A post-historic age RPG: The Chronicles of Future Earth 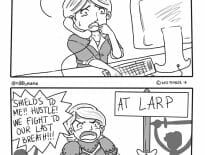 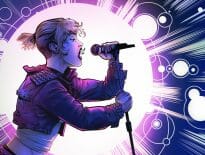 Tabletop & RPGs Genre Police: A Change Is Gonna Come
wpDiscuzComment Author Info
Manage Cookie Consent
This site uses cookies 🍪, and links are ads that may earn bloggers some money 💰, and with this alert, I very much hope that these dark truths 🧌 are acknowledged.
Manage options Manage services Manage vendors Read more about these purposes
Preferences
{title} {title} {title}
Loading Comments...