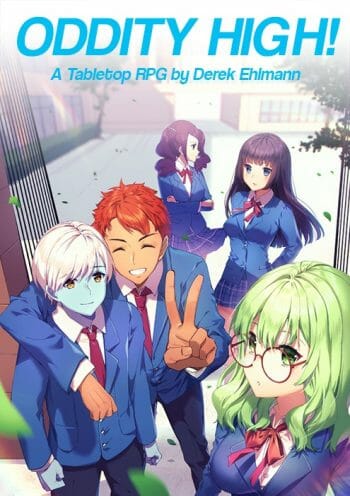 We’ve seen a load of strong Kickstarters this week. Amazing video pitches. Huge licenses and remakes of popular classics. Given that we’re between San Diego Comic Con and Gen Con this isn’t a surprise. I wanted to find a promising Kickstarter on the other end of the budget scale and found Oddity High.

There’s no pitch video for it.

As the cover makes clear, this is an anime-inspired tabletop RPG about Japanese high school life. One of the weird animes in which friends turn out to be aliens, or ghosts, or talented psychics and they all hang out together in a gang.

The RPG uses the Apocalypse Engine, and that system is both established and popular. The rest of the pitch is more of an unknown. We don’t get sight of any other art, and this is creator’s Derek Ehlmann’s first go at RPG development.

We do know that the final book will be about 150 pages, 6″ x 9″ and there will be internal art (by Rosuuri). As is common for Kickstarters most of the pledge money raised goes to art. We’re not even talking about this project finishing this year. I think that’s realistic.

So what is Ehlmann asking for regarding funding? He’s after US$3,00 and has raised $884 from over 20 backers in the first few days. At the time of writing, there are 29 days left on the clock.

A pledge of $8 gets you a PDF, $10 will get you an at-cost softcover voucher from DriveThruRPG. Step up to $25, and you get the hardcover. There are plenty of other pledge tiers available including some very limited early birds.

I’m going to back this Kickstarter, I like the concept, and I want to help all sorts of RPG publishers from the established to the newcomers succeed. Good luck Oddity High.

Tabletop & RPGs Zombicide: The Role-Playing Game is the next proje…

Geek Stuff TradeCraft Bonus: D20 gaming light shade
wpDiscuz
💰 Copper Coins 💰 Geek Native is an affiliate and may earn commission on purchases you make from third-party sites.
🍪 Privacy & Cookies 🍪 The site uses cookies to survive. By accessing the site, you agree to use your browser to control cookie use or take 1d4-3 privacy damage (tracking). If you defeat cookies via ad blocking, please consider the Patreon. An intro to cookies, and how to control them, can be found here. I Manage Cookies