You are here: Home / Books / Burn this book: A review of Fictional Alignment 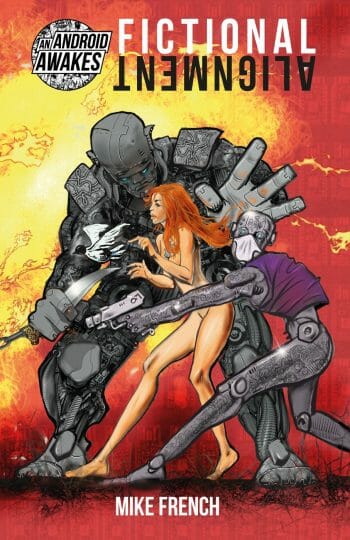 To be clear, ‘Burn this book’ is the advice on the back cover of Fictional Alignment. Reading fiction, we’re reminded, is a criminal offence under The Fictional Alignment Act to read a work of fiction and that anyone doing so will be terminated.

Terminated is the right word to use when killer robots from the future are involved. Or, more correctly, androids.

Fictional Alignment is Mike French’s sequel to An Android Awakes. Back in ’16 Geek Native took a look that book in a post called Write or die: A review of An Android Awakes. Indeed, the connection between books and death is pretty clear from the outset. In An Android Awakes, we follow PD121928 as he tries to write a successful book. The price of failure? Death.

In this sequel Sapphira, a prostitute with many connections, as succeeded. But she’s human. She’s written the first successful work of fiction in human history for 100 years. The androids are angry and frustrated that they can not erase this success. Cue a series of violence, romance, humour and unexpected twists.

What would you do to get rid of a work of fiction that you can’t delete from history? The androids decide to travel back in time to re-create the events in Sapphira’s book so that it becomes a piece of nonfiction rather than fiction.

I think it’s essential to have read An Android Awakes first. You see, Sapphira’s book is based on PD121928’s short stories. We revisit the tales from the first book. If you don’t know those stories, then I think you’ll find Fictional Alignment a tough book to crack.

Once again it’s the androids that make for the best characters. Two brutes called Heisenberg and Tractatus are handed the task of turning Sapphira’s writing into fact, and they’re both unrelenting and unpredictable in how they set about ensuring their success.

Fictional Alignment is a gripping read. It’s very different, and if you’re looking to refresh your synapses by exploring off the beaten track, then this is your book. Although, read An Android Awakes first, and I think An Android Awakes is the better book. It’s undoubtedly my favourite of the two.

How come? Fictional Alignment can get a bit surreal (dreams) at times, and the layers to the story meant I prefered to read it when I was fully awake and not as I settled down in bed at the end of the day.

Burn this book: A review of Fictional Alignment

Tabletop & RPGs Choose your weapon dice box
💰 Copper Coins 💰 Geek Native is an affiliate and may earn commission on purchases you make from third-party sites.
🍪 Privacy & Cookies 🍪 The site uses cookies to survive. By accessing the site, you agree to use your browser to control cookie use or take 1d4-3 privacy damage (tracking). If you defeat cookies via ad blocking, please consider the Patreon. An intro to cookies, and how to control them, can be found here. I Manage Cookies