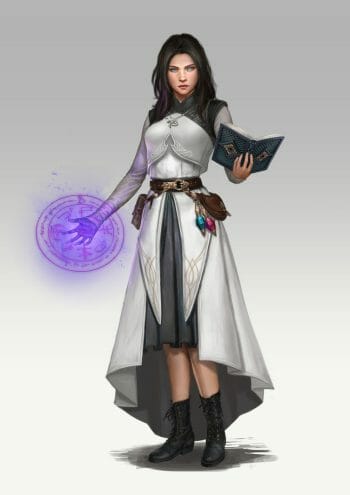 Does your D&D Wizard have the 1st level Conjuration ritual “Tenser’s Floating Disk” but struggles to find a use for it?

The challenge with the disk is that it stops moving if you are within 20 feet of it. Once your wizard is further away then it’ll try to follow you, floating 3 feet above the ground. In D&D 5e you can’t ride your own disk.

The name Tenser is a famous one in D&D. It is an anagram of “Ernest”, one of Gary Gygax’s sons, and the name of his Wizard character. As you might have guessed Tenser liked his loot. Tenser’s floating disc was created in response to an adventure in the Greyhawk dungeons when Ernie and Elise Gygax’s PCs found a chest of 3,000 copper coins they couldn’t carry.

Have you thought of any more uses for Tenser’s Floating Disk? Let us know in the comments below.

22 ideas for a spellbook that isn’t a book

Many tabletop RPGs have a spellbook as a necessary in-game item for wizards and spellcasters. The spellbook is generally used as a mechanical means to both limit and explain the spells the character has access to. However, some GMs might allow characters to use an item that has the same mechanical effect while giving off […]