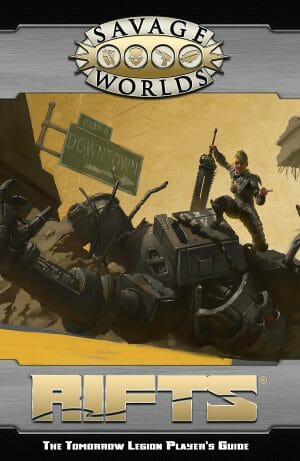 It doesn’t take much more than flipping through the first few pages of the Savage Rifts: Tomorrow Legion Players Guide to know that writer Sean Patrick Fannon has a deep love of the gonzo sci-fi setting first introduced to the world by Palladium Books in 1990. Fannon’s take on the material is significantly more than a straight conversion from one RPG system to another; it is an almost Hollywood-esque reboot, not the shitty kind made for a few quick bucks, but the kind that comes from a reverence for the source material and a longing to bring it into the hobby’s modern metagame. Savage Rifts is to Rifts what J.J. Abrams Star Trek is to the original.

If you’ve read virtually any other Savage Worlds product, then you have a pretty good idea of what to expect, in regards to production and organization. The artwork is a blend of classic Rifts imagery and some new work to provide some modern flavor. The book is organized to be read (as opposed as organized to be referenced, as many larger RPG corebooks are), and it reads well, with clear writing and fine editing. As with most Savage Worlds books, the pdf is light and easy to use, and you could run a game with a single copy of this book on your tablet and have few issues (as opposed to the heavier, textbook style games that often make for clunky pdfs, to the point that the physical book is almost still needed to assure swift and smooth play).

As the name implies, this book is mostly for character creation, full of Edges, Hindrances, gear, rules tweaks, and anything else one would conceivably need to bring a world of Glitter Boys and playable baby dragons into the game system that famously powers Deadlands. Easily the coolest conversion to be found in the book’s trim 146-page length is the Iconic Framework. Basically, all the “O.C.C.’s” of Rifts have been converted into packages of Edges, Hindrances, and gear, called Iconic Frameworks. Players making new Rifts characters choose one of the frameworks in the same fashion that they’d chose a race in a traditional Savage Worlds game, and follow the instructions for that framework, which usually entails rolling on several random tables to establish the specific mechanical (and roleplaying) quirks of your character. Rifts fanatics worried that Savage Worlds would not be able to handle the class-based character generation of Palladium’s game can rest easy. These iconic frameworks not only capture the uniqueness and depth of its predecessors numerous classes, but it combines it with the speed, ease, and overall rollicking good time-nature of Savage Worlds.  Fannon has covered every base in the core Rifts character generation experience, and this system allows you to make anything found in Palladium’s game, from juicers and crazies to cyber-knights and rogue scholars, to full and partial conversion borgs, to tech-wizards and ley line walkers.

Fannon leaves few stones unturned in his treatment of Rifts, and the few mis-steps are trivial and arguably irrelevant. For example, Fannon goes through pains to preserve the unique terminology of Rifts; M.D.C., S.D.C., P.P.E., and I.S.P., for example, are all pretty straight-forward conversions to SW’s already-existing rules, but Fannon keeps the language of the source material. As a fan of both games, I appreciated this attempt at keeping the spirit of Rifts intact, but I’m not sure if a mostly-cosmetic inclusion of these terms is absolutely necessary. Still, though, I respect and appreciate Fannon’s willingness to go this far into the details of Palladium’s original game to smooth over the conversion for a new generation of fans.

Fannon has accurately and successfully converted not only the setting, but the look and feel of Rifts into another game, and it works, and it’s awesome. Fence-sitters, go ahead and pull the trigger. 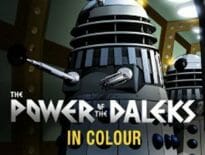 TV Doctor Who: BBC releases a regenerated The Power o…