You are here: Home / Games / An exclusive peak at concept art from Ether Wars

Ether Wars is back from the ether of an unsuccessful Kickstarter. The game was always one that could have funded and it looks like the second attempt has addressed one of the issues that were annoying some backers. The English and Spanish editions will now be entirely separate so there’s no more sharing space. You can read more about on the campaign page.

This Kickstarter is looking good for Burning Games. There’s nearly €7,000 in the pot and 150 backers on just the first day.

What could go wrong? The pledge tier is brutal. €39 will get you one copy of the game in the language of your choice and all the stretch goals. There’s no lower reward tier. There’s no tier for hero backers to come along either.

The game comes with more than 50 custom dice and lots of tokens. It feels expensive. Bored to Death has a review from last year.

Geek Native has grabbed a sneak peek at the concept art that led to the strange-looking Ether planet you see in the video.

This image finally evolved into this Ether planet.

We can see the logo went on a similar journey.

An exclusive peak at concept art from Ether Wars 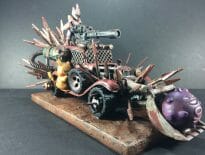 Geek Stuff The Mad Mad Poke Road custom build could be yours!… 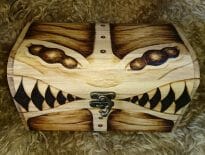