You are here: Home / Books / Comics / Superhero Nerd: A review of Geek-Girl #1 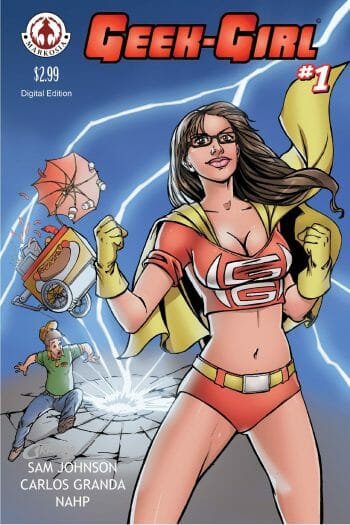 Sam Johnson’s Geek-Girl has been on my radar for a little while, at least from last year when Geek Native previewed Voodoo Junkie Hitwoman: Cabra Cini (rated as: hopeful) but the author himself has been getting mentions on the site since 2014 in conjunction with Free Comic Book Day.

What Geek-Girl does is flip the usual cliché on its head. In this comic strip the unpopular girl does not become a superhero and improve her life while improving that of others. In this story college coed Ruby Kaye is already popular. She uses that popularity and her good looks to bait two guys into giving up a pair of hi-tech glasses invented by the local brainiac.

The glasses might well give her powers but the very first thing Ruby discovers is that they’ve turned her into a bit of a klutz and her fickle friends soon start to abandon her. In issue #1 we don’t really discover whether this is because the other girls are jealous but it all seems possible in the cruel world of college girl social status.

It gets worse for Ruby. She decides to give the superhero lifestyle a go and complete with an itty-bitty costume designed by a friend she starts to patrol the city. It’s boring, nothing happens, right up until she encounters the city’s main hero – Neon Girl – getting a beating from a new supervillain.

Neon Girl is taken out of action but not before enlisting Geek-Girl into the fight back against this new lightening slinging menace.

I whizzed through Geek-Girl #1. It’s an easy read. The set-up does offer an interesting twist and I’d like to find out whether Ruby gets any better as a superhero or not. I’m also curious about the city’s collection of heroes and villains as there’s the suggestion there’s more to come.

What gives me cause to pause on Geek-Girl is the women. We’ve strip poker, girl-on-girl kissing and skimpy costumes. I don’t have a problem with any of that but to enjoy a comic series I need characters I can get into; not objects. Now, we might have some of the warning signs of too much fan service in Geek-Girl but so far Ruby Kaye feels pretty interesting. The journey from brat to nerd might be a good one to follow too.

The good news is that Geek-Girl is available from Comixology for only a few bucks and so giving issue #2 a chance won’t be a chore. At the time of writing the first issue has a 3-star rating from 2 reviews on the site.

My copy of Geek-Girl #1 was provided for review.

Superhero Nerd: A review of Geek-Girl #1 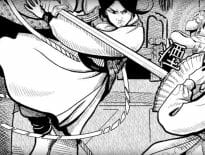 Interviews How an illustrator gets into drawing for RPGs: An … 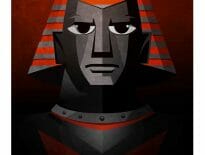