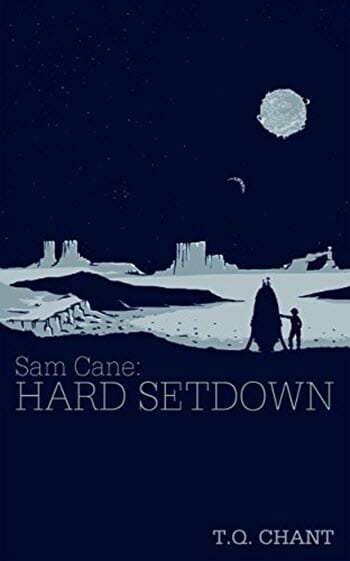 Tim Chant’s Sam Cane: Hard Setdown weighs in at just 99 pages. It’s a novella and the perfect sort of size for a rainy Sunday, a business flight or something to read in the hotel room after a Comic Con.

As it’s short and snappy Sam Cane: Hard Setdown gets to the point. Sam is dropped on a rim planet, there to help out in the frontier post but discovers the colony has been abandoned.

There’s a touch of mystery here – what’s going on. Where have all the colonists gone? There’s a touch of survivalism too – you’re abandoned in a wild-west desert town; can you scavenge what you need to survive?

These touches soon give way to fully fledged action drama. A mystery like this typically has answers that lead to trouble.

Sam’s an interesting character. She’s an ex-con artist and that landed her in the military. She was an equipment clerk in the army, not a super commando, ranger, special forces, explosives specialist and now she’s back on the run. This background doesn’t just give Cane the skills to survive but gives her an interesting outlook on life.

One thing that becomes quickly clear; Sam Cane has a large number of rules (sort of rules), forged from experience, which help keep her alive. They’re tested here on this outback planet. To be honest, I may have lost track of all the numbers and I have a hunch I saw two different rule #5s.

Chant’s writing style is crisp (or well edited) and you learn what the locations and characters look like only through the observations and comments of characters in the book. There’s not much other description but that doesn’t stop a clear picture of the far flung planet forming and images of characters growing. In fact, there are some gory scenes in Sam Cane: Hard Setdown and since you’re typically viewing the world through Sam’s eyes the impact is all the more interesting.

Overall? I bought the ebook after Tim’s guest post on Geek Native about building a game world on the fly and I’m glad I did. It’s an easy read, you’ll whisk through it in no time and have a blast. The hardcore sci-fi is at the very start and a little towards the end; the middle of the novella will suit any reader and so I don’t think you need to be a sci-fi fan to enjoy. 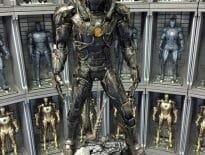 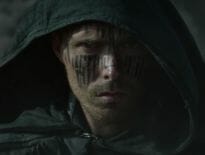