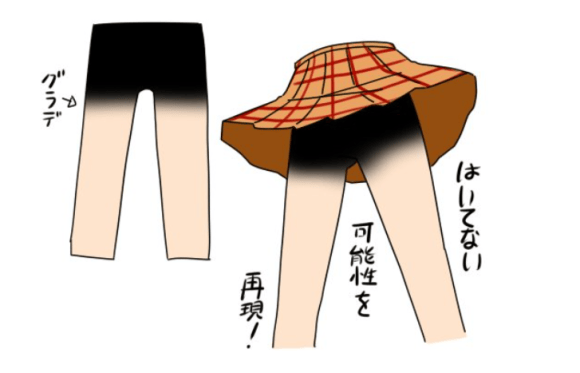 A Japanese illustrator has come up with a clever solution to a cosplay problem.

Many anime outfits can be on the skimpy side. While dressing up as a popular character can be fun and empowering it might also be cold and embarrassing.

Is the solution a pair of beige tights that quickly fade to censored black once they approach the hips?

The tights would help provide warmths and coverage. The beige part, which could be made in any alternative colour, would be designed to match up with skin tones and give the impression of bare legs. The censor touched black shadow at the top would only ever factor in if the cosplay skirt was a bit short.

The effect looks about right to me. What a smart idea.

Geek Stuff Are dragons scary? Geeks don’t think so
wpDiscuz
Loading Comments...
Comment
×
💰 Copper Coins 💰 Geek Native is an affiliate and may earn commission on purchases you make from third-party sites.
🍪 Privacy & Cookies 🍪 The site uses cookies to survive. By accessing the site, you agree to use your browser to control cookie use or take 1d4-3 privacy damage (tracking). If you defeat cookies via ad blocking, please consider the Patreon. An intro to cookies, and how to control them, can be found here. I Manage Cookies