You are here: Home / Games / Tabletop & RPGs / As seen on TV: A review of the Dragon Age RPG core rulebook 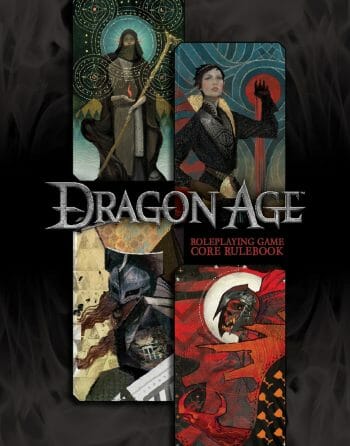 Oddly, role-playing games have had a very good streak in bringing franchises to the table. Star Wars and Lord of the Rings both have very popular, remarkably well-done tabletop RPGs, for example. And now, the videogame franchise Dragon Age has its own tabletop role-playing game crossover…and it is every bit as good.

Technically, the Dragon Age RPG has been around since about 2009, in the form of boxed sets. There were three of them released over the years, each stacking on top of the other to make a complete game at the end. Now, however, a single hardcover volume is bringing the whole experience together, allowing a group of gamers to start with level one novice adventurers and bring them all the way to the heroic level 20 in just one book. I cannot attest to the quality of the boxed sets, but the first thing I’ll say about the core rulebook is that it is very much a complete volume, perhaps one of the most self-contained/self-sufficient RPGs I’ve ever come across. Many RPGs say they can be played with just the core book for years, but in reality they’re counting on a sourcebook purchase or two. However, the Dragon Age RPG Core Rulebook has so much content within its 460+ pages that it really does feel like that is possible. The hundreds of pages devoted to the history, culture, and geography of Thedas is well-written, professionally laid-out, and complimented by fantastic original artwork throughout. The book has the flashy but still readable style publisher Green Ronin is known for, as seen in its other products like Mutants & Masterminds and the Game of Thrones RPG. So even though the pdf (which, currently, is the only way the game is available, though a forthcoming hardcover is available for pre-order) rings up at a hefty $30 price tag, it is absolutely worth the price.

Much ado has been made of Dragon Age’s mechanics, the so-called “AGE System.” At its core is a simple 3D6 plus relevant ability plus any applicable modifiers versus GM-determined target number. One of the three six-sideds is the “dragon die,” and the number that comes up on it can reveal the degree of success or failure, when such a thing is relevant. When doubles are rolled, the roller can perform stunts off a chart. Each stunt has a cost in “stunt points,” the amount of which you have equal to the number rolled on the dragon die. This adds a fun little swerve into Dragon Age’s combat, exploration, and interaction/roleplaying scenes but still keeps the game fast-paced, easy and intuitive to grasp. As in the videogame, there are only three classes (rogue, warrior, and mage), but there is a wide and deep array of talents that can be selected within each that can create enough unique combinations that not every character of the same class will feel similar. Also similar to the videogame, races and backgrounds have been merged together, so you don’t just say “I’m an elf rogue,” you’d say “I’m an escaped elf slave rogue.”

The setting, for those of you not familiar, is just as approachable and intriguing as the mechanics. Dragon Age’s world of Thedas is a pretty baseline fantasy realm with just enough twists on the formula to make it unique. The end result feels a little like a mashup of Lord of the Rings, the Forgotten Realms, and Game of Thrones. The game’s designers go out of their way to keep the corebook spoiler-free, so regardless of how much or how little of the source material you’re familiar with, the setting will feel fresh and alive, ready to be explored and exploited by you and your friends.

All of this adds together to an elegant yet straightforward tabletop RPG that feels remarkably close to its console RPG roots. With the popularity of the videogame and the approachability of the tabletop game, the Dragon Age RPG is quite-possibly one of the best “gateway games” the hobby has, right up there with Fantasy Flight’s Star Wars RPGs. Combine this with the internet-famous Tabletop videos about Dragon Age hosted by Wil Wheaton, and you have a role-playing game that seemingly out of nowhere has emerged as a completely viable alternative to Dungeons & Dragons. Whether you’ve beaten all three videogames or never even touched them, the Dragon Age RPG Core Rulebook is a gateway to a vast, epic world of fantasy adventure.

That’s a great review. I’ve got to say, mixing the background with the class is a neat idea. It adds instant “character” to the character (hehe). I think I’ll have to check this out. I’ve never played Dragon Age, but it looked like a fair bit of fun. Of course, being a traditional tabletop gamer, I think this book sounds more fun than the game :)
What do you think are the biggest hurdles for a game like this?

oliverrshead Honestly, there aren’t any major hurdles at all. The rules are straight-forward. The setting is detailed and interesting, but open enough to interpretation and not bogged down with a lot of canon. You only need six-sided dice. The only real hurdle, in my opinion, is the game’s pricepoint. $30 is a lot to pay for a pdf. Pre-ordering the hardcover book is $60, but the pdf comes free with it, making that the better deal in my opinion. As I said in the review, the game is absolutely worth the price, but still, many gamers are hesitant to put… Read more »

EdGibbs Ah yeah, that can be a bit of an issue. You’ve gotten me really interested on this though, so I think I may fork out for the hardcover. It would have been better if the PDF was a little cheaper, as your say, even if it is awesome quality.

As seen on TV: A review of the Dragon Age RPG core rulebook 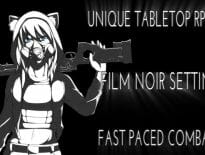 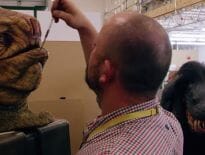