You are here: Home / Geek Stuff / No room for nostalgia as gamers prefer modern consoles for music

It may be fashionable to do retro console style covers of modern songs or A Capellas on YouTube but Geek Native’s research shows that gamers associate more modern consoles with the best music. 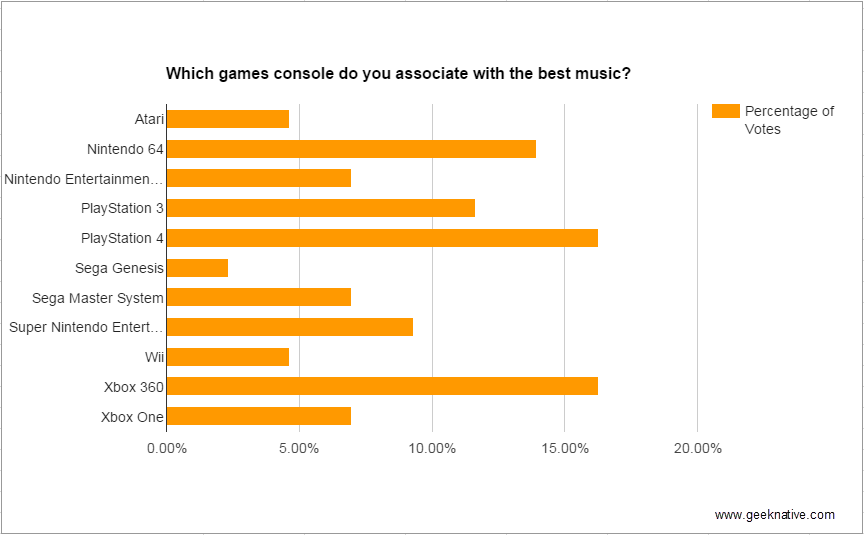 86 gamers answered the poll in the blog’s Jeff Penny competition. It should be noted that the blog makes no claim the poll was scientifically rigorous. Results are shared only as a matter of interest.

There was a tie for first position for the console associated with the very best music. Microsoft’s previous generation device scored 16.28% of all the votes which was enough to match Sony’s PlayStation 4.

The highest scoring “retro console” was the Nintendo 64 which took 13.95% of the votes; enough to beat the Xbox One.

There was a tie for last place as well with Nintendo’s Wii only able to match the Atari with less than 5% of the votes. Consoles not listed in the survey failed to score any points although the Dreamcast and handheld consoles were not made available as options to vote for.

Do you agree with the findings? Why not let us know which you favourite computer game soundtrack was and for which console in the comments below.

No room for nostalgia as gamers prefer modern consoles for music

Console Are you ready for the Final Fantasy VII remake?

Console The Warhammer RPG at E3: Vermintide
💰 Copper Coins 💰 Geek Native is an affiliate and may earn commission on purchases you make from third-party sites.
🍪 Privacy & Cookies 🍪 The site uses cookies to survive. By accessing the site, you agree to use your browser to control cookie use or take 1d4-3 privacy damage (tracking). If you defeat cookies via ad blocking, please consider the Patreon. An intro to cookies, and how to control them, can be found here. I Manage Cookies