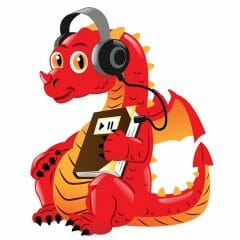 This month we’ve got the first book from Marc Turner’s The Chronicles of the Exile When the Heavens Fall, Douglas E. Richards’ sci-fi BrainWeb and James Cambias’ military sci-fi Corsair. As an added bonus and perhaps for a limited time only a link to a free stream of the soundtrack to Terra Kaiju – a comic book about love, sacrifice and giant monsters.

Elizabeth Santiago and David Schwartz are two hackers who meet at MIT in the early 2020s. They end up as rivals; Elizabeth trying to protect robotic space mines while David sides with the pirates.

Set in the near future, Nick Hall is the unwilling subject of brain implants that allow him to surf the web and read minds. A bold terrorist attack forces Hall to reveal his powers and now the world’s powers are after him.

When the Heavens Fall

When the Book of Lost Souls is stolen by a power-hungry necromancer who intends to use it to resurrect an ancient race, control the dead and challenge Shroud the Lord of the Dead a host of competiting forces converge. Among those interested in the powerful relic is are a reluctant Guardian, a troubled price and an incredibly powerful youn girl who may be able to take on Shroud herself.

We had an article from Terra Kaiju’s Joe Badon back in December called Godzilla Minus Godzilla: The coolest Kaiju films that don’t feature The Giant “G”!. There were a range of movies in Badon’s list.

The soundtrack, Kaiju Temple, takes the title to a new place altogether – to noise and drone. Fan of artists like Small Life Form, IANTH, Electric Bird Noise, Chvad SB or Goddakk then you’ll want to give this a blast.

Tabletop & RPGs Crestfallen RPG returns
💰 Copper Coins 💰 Geek Native is an affiliate and may earn commission on purchases you make from third-party sites.
🍪 Privacy & Cookies 🍪 The site uses cookies to survive. By accessing the site, you agree to use your browser to control cookie use or take 1d4-3 privacy damage (tracking). If you defeat cookies via ad blocking, please consider the Patreon. An intro to cookies, and how to control them, can be found here. I Manage Cookies