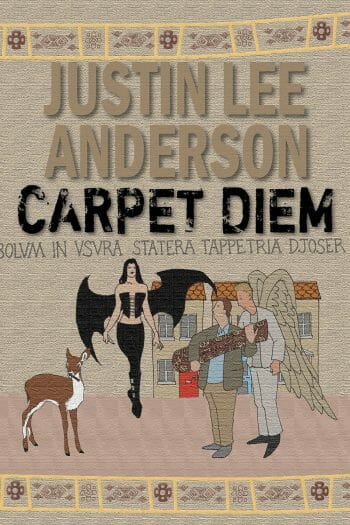 Justin Lee Anderson was born in Edinburgh, spent much of his childhood in the US thanks to his father’s career in professional football (soccer), before coming back home, via France, to settle into happy family chaos. He’s been writing for 15 years and misses Firefly. Justin’s book, Carpet Diem is just out and so Geek Native caught up for a chat.

What’s the elevator pitch for Carpet Diem? How would you sum it up and sell it to a mildly curious reader of books if you had the length of an elevator ride to do it?

You know, even after writing almost 100,000 words, this is the hard bit! Carpet Diem is an urban fantasy comedy about an antisocial hermit whose living room carpet turns out to be the deciding factor in a bet between God and Satan. When the carpet is stolen, he has to get it back to save his own life. It’s a witty, sexy, sweary, fantastical thriller. Is that short enough? How long is our elevator ride?

Where did the idea for Carpet Diem come from? What would you cite as inspiration?

An issue of Neil Gaiman’s Sandman and (appropriately) a dream. I’m a huge Neil Gaiman fan, ever since I first read Dream of 1000 Cats (also an issue of Sandman). I have a full first run of the series that’s one of my most prized possessions. But that wasn’t the issue that inspired Carpet Diem. It was Calliope.

In the story, a struggling author, Richard Madoc, takes the muse Calliope hostage and uses her to inspire his writing. When Morpheus frees her at the end of the book, he punishes Madoc by cursing him with a constant flow of ideas, which he scribbles down any way he can – even in his own blood, if I remember rightly. Anyway, some of the ideas he scribbled were just brilliant – as you’d expect from Gaiman. I think there was one about a man who won a historical day in a card game – something like May 23, 1779 – and it sent me off into thinking in that off the wall way. What would that be like? Would he be able to visit the date anytime he wanted? To live in like a bubble, outside of normal time? Would the other people in the day be trapped there with him, or even know what was happening?

I think that was the first time I really consciously decided to open my mind and explore ideas like that. At that point in time, I was carrying a dictaphone around with me, for recording ideas – and one day, walking to the shop, I think, it just hit me: a story about a man whose living room carpet turns out to be the deciding factor in a bet between God and Satan. I think I still have the dictaphone with that on it, somewhere!

I’ve had a lot of other ideas in a similar vein, but that one always pulled me back – there was something about it. So I started writing it, by creating the main character, Simon, and establishing the world – but then I was stuck. I didn’t really know where to take the story.

Then one morning, I woke from a particularly vivid dream, and I immediately realised that elements of it were perfect for the book, so I wrote down everything I could remember straight away – and a lot of what happens on the Island in the middle of the story stemmed from the ideas I got from that dream!

I like reading to music. Are there any albums or artists you’d suggest I listen to while reading Carpet Diem? 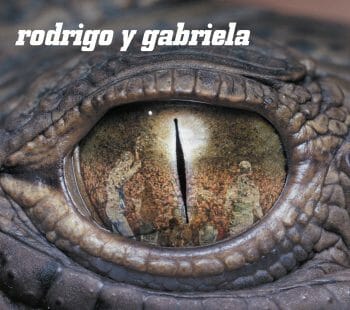 I can tell you what I listened to while I was writing it. I like having music on, but it has to be something familiar, so as not to distract me. I could have gone for something like Pearl Jam or the Foos, but even with them I found myself singing along, which distracted me from writing – so I chose a few things with no lyrics: Rodrigo y Gabriela and Apocalyptica. Those worked beautifully, and I would always just put them on in the background while I wrote. So those artists will always be associated with the book now, for me.

Interestingly, they didn’t work for everything, though. A few years ago, my wife and I co-wrote a film adaptation of a novel for an independent producer. The final scene is a climactic battle, and I wanted to just plug in and write the first draft, so I stuck on my usual writing playlist – and it was a disaster! The mood was all wrong and I couldn’t get into the scene at all. I tried a few things and, in the end, it was Disturbed that worked for that, getting me into the right headspace. So there you go – different music for different writing.

Incidentally, I also recommend a good single malt while reading the book – Lagavulin or Ardbeg, perhaps. I got through a fair bit of that while writing it, too!

Which other authors would you recommend to your readers? Why?

Unsurprisingly, Neil Gaiman. His imagination is just so rich and the way he weaves existing mythologies together to create these vivid, wonderful worlds and characters is a joy. When I read his writing, I feel like I’m reading the voice I hear inside my own head – it’s just so natural, like coming home. American Gods is his best work, I think.

Joe Abercrombie is another favourite. I came across his work by accident, but his First Law trilogy is just brilliant. It’s gritty, brutal fantasy, with such great, well-created characters. I think what I like the most about his work is that I never find myself thinking “that doesn’t ring true” – everything that happens feels right, and not in any way sanitised. He writes with a real sense of honesty and it’s often surprising, but still grounded. I’d kill to see it turned into a film trilogy or a series like Game of Thrones.

I’m also a big fan of Jasper Fforde. His Thursday Next books are so clever and inventive – especially if you’re already a big reader – there are so many brilliant literary Easter Eggs in his work that you can congratulate yourself for getting! Any English student should be handed Jasper Fforde’s books on graduation, so they can rediscover the joy of reading for pleasure again through his imagination and humour.

Tom Holt is also great – his series that begins with The Portable Door is brilliantly clever and funny. Jo Nesbo’s Harry Hole books are engrossing, gritty whodunnits, and Harry is one of my favourite modern literary characters. And another with a literary bent – Carlos Ruiz Zafon’s Shadow of the Wind and The Angel’s Game. Those books are real works of art – mystery, thriller and magic realism set in old Barcelona.

At the time of writing, the top 5 star review you have on Amazon.co.uk for Carpet Diem makes the comparison to the likes of Sir Terry Pratchett, Neil Gaiman, Tom Holt, Ben Aaronvitch and Piers Anthony. Is that flattering? Entirely wrong?

Hugely flattering. Gaiman and Tom Holt I’ve covered. The one book that the most people have told me Carpet Diem reminds them of is Good Omens, by Pratchett and Gaiman. That is one of the best things I’ve ever read, so I’m delighted people see them as similar.

I haven’t read any Ben Aaronovitch or Robert Rankin – who’s another author I’ve been told I remind people of – so I can’t say if they’re accurate, but they’re both doing pretty well, so I’m still chuffed to be talked about in the same sentence! They’re both on my ‘to read’ list.

And I grew up reading Piers Anthony. I think I found his first Xanth novel in my school library when I was 12, and from then on it was hard to get me to read anyone else for a long time! So that’s also a huge compliment and I can totally understand how he has influenced me as a writer.

Many of Geek Native’s readers are tabletop roleplaying gamers creating their own characters to play in fictional worlds of adventure. What are your top three tips for crafting believable personalities?

Are you much of a gamer? Which games would you recommend?

I tend to get very addicted to one game at a time and play it fairly obsessively. In the last year I’ve become particularly addicted to Ingress. There are very few games you can play in the pub with your mates, and on the bus home! Ingress has a great community around it and I’ve met some brilliant people through playing.

Other than Ingress, my most recent addictions were the Batman Arkham games (I’m a huge Bat-geek) and Skyrim. I’ve also played a lot of Final Fantasy in my time. I’m definitely a third-person RPG gamer, I find first-person too difficult to get my head round for some reason.

I also have a semi-regular role-playing session with a group of friends who’ve been playing together for years. We used to play off the AD&D system, but for a good few years now we’ve been playing Fantasy Hero. I’ve got a mage character who I think I’ve been playing for about eight years. He’s like an old friend, now!

What can we expect from Justin Lee Anderson next?

Good question! Most likely one of two things. I’ve loosely plotted a sequel to Carpet Diem and if the book does really well, there’s a good chance it will be that. However, I’ve also started another project all together, under the working title Eidyn. It’s a more traditional fantasy set in a world which is based loosely on Edinburgh and the historical basis for the names of the different areas. The characters are actually based on characters from our role-playing sessions. I started out consciously trying to write it for Young Adults, but quickly found I was struggling with censoring myself, so I started again and wrote it the way I naturally wanted to – which is much more sweary and towards Joe Abercrombie’s style, if not quite as intense. Whenever I think about writing, it’s usually that that gets me excited, so we’ll see. I genuinely haven’t decided yet.

Looks like a hot one! Pick it up today.

authorjla Aha! Muy interesante, dude. I love that idea of winning a historical day in a card game, too – wish I’d thought of that!!

TerryTyler4 Isn’t it genius? And that was just one of them! neilhimself has a ridiculously rich imagination.

authorjla I can think of good stuff like that now and again, but, alas, am far better at writing real life situations, I find. :)

TerryTyler4 See that’s where I struggle. Give me a good escapist fantasy and I’m all over it. Real life? That’s hard! 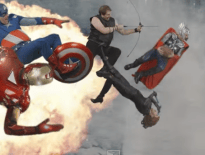 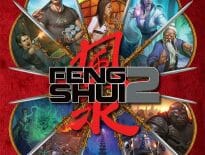