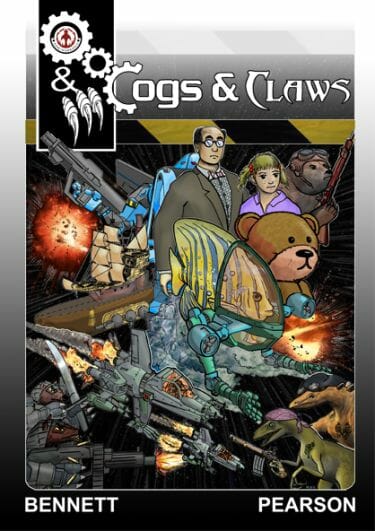 I wonder if it’s wrong to think “furry” whenever I encounter an anthropomorphic story? That’s what I did when I started to read Jimmy Pearson’s (author) and Brian Bennett’s (illustrator).

There’s nothing quite like tackling your “furry assumptions” than the first couple of panels showing a fish swim into a robotic unit which swiftly becomes a fighter spacecraft. I knew it was worth giving Cogs & Claws a fair crack of the whip after just a few pages and I’m glad I did.

The comic book is described as an “all-pages anthropomorphic space opera” and while it’s available in hardcover and softcover it’s the digital copies I think will interest people most. This is something you can download to your tablet from iTunes or Kindle and use to entertain children of most ages.

The races of the Animaloid Galaxy are at war. They are fighting against the unstoppable rage of the Rat Army. The rats, over the years, have bred themselves to be a collective plague that stops at nothing until the galaxy is there.

This may be the issue of Cogs & Claws that sets up the world and some of the characters but there’s plenty of action here. We see the rats in their war suits and spacecraft engage with the other animal-aliens. 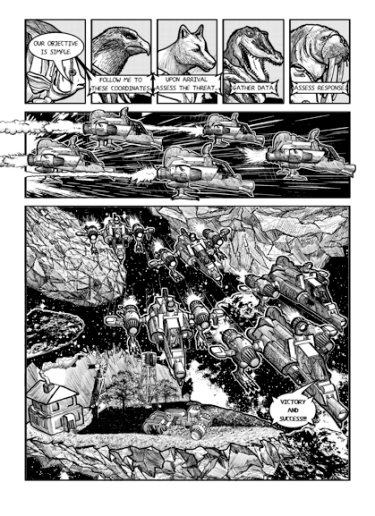 At the same time, in another universe, an inventor and his daughter find themselves on the run. He’s wanted to make weapons. He’d rather not. So with the teddy bear robot he made for this daughter the three escape… and there’s no surprises in predicting that the two halves of Cogs & Claws meet. The humans find themselves in the fantastic furry universe.

There are a number of high points in Cogs & Claws. I was pleased to see that the war with the rats is actually pretty brutal. Sure, we may have a young girl and her teddy bear but the combat in the graphic novel pushes the age range up and not down. I think this makes it more likely that the book will be enjoyed by today’s young geeks. They’re no push overs.

Equally, I was pleased to see the diverse range of anthropomorphic creatures. We’re not dealing with Starfoxes, cute cats and macho wolfmen here. We’ve got fish life and the anthropomorphic giraffe looks suitably weird. Space furries, I think, should happen more often.

It also feels like Cogs & Claws is a generous book. Whenever I thought I got to the end there was more the come. One of the reasons for these “false ends” is that there are interstitial sections in the book that take a time out to showcase the technology and creatures of the Animaloid Galaxy. At times it was like reading a generously illustrated RPG supplement. This, of course, is a good thing.

Over all; I enjoyed Cogs & Claws more than I thought I would. I read it on a plane trip which was too crowded to offer me any chance to sleep and yet my brain was tired enough to make the flight very uncomfortable. Cogs & Claws successfully distracted me and made the trip home pass all that much more swiftly.

My gut feeling is that the series is best suited to the younger reader or to parents who want to find series in common with their kids. You shouldn’t judge a book by the cover but with Cogs & Claws you can see what you’re getting.

My copy of Cogs & Claws was provided for review. I read it on my Nexus 7 and had no problem with clarity or scrolling. 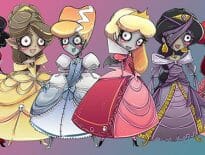 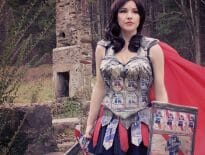