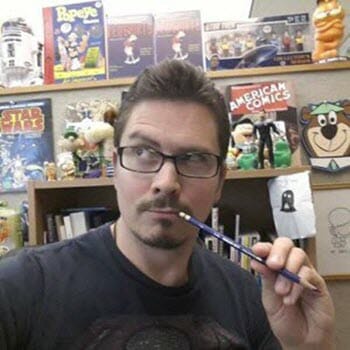 I first encountered David Reddick’s Intelligent Life over at Comics Kingdom. There it’s one of my favourite strips, among many other good series, and I’ve actually configured the system to email me updates rather than rely on RSS as I normally do.

I’ve gotten to know the characters; Skip, Gwen, Mike and Barry pretty well over the months. I’ve been able to follow their geeky worldview via their social life, working life and, of course, their hobbies. When I had a chance to talk to David Reddick himself – I jumped at it.

Tell us a bit about yourself and Intelligent Life.

I’ve been working in comics for about 20 years, starting in my local small weekly newspaper, then another local paper, then national magazines doing gag cartoons, and progressing into editorial cartooning for a daily newspaper chain. Eventually I moved on to working at the Garfield cartoon studio (where I work today by day), and then also working for Paramount Pictures/CBS Studios in the Star Trek franchise (via my webcomic “The Trek Life,” that appeared at STARTREK.COM for three years, as well as other Trek-related work for IDW Publishing, Tokyopop, CBS Mobile, ROK Media in UK, etc.). From there, I expanded my Trek/geek reach (lol) to work on two webcomics for Roddenberry.com, called “Rod & Barry” and “Gene’s Journal.” I also created my own fantasy webcomic “Legend of Bill.” Eventually all of this led me to my daily syndicated comic strip about geek life called “Intelligent Life“, distributed by King Features Syndicate.

Outside the comics, I spent three years in the U.S Navy, living in Japan, and was a gallery artist, having many exhibits of my abstract paintings in galleries ranging from Indianapolis and Florida to England and France. Whew!

Intelligent Life is the culmination of my many years attending conventions and my own living of, and genuine love of all things geek culture, which I don’t just write and draw… I live!

You do Social Media for a certain very popular cat. Just how important do you think Social Media is today for cartoonists?

Yes, I’m the Digital and Social Media Coordinator at Paws, Inc., the Garfield studio, and I oversee the social media among other new media things like apps and digital media. Garfield’s Facebook recently passed 17 Million, which I’m quite proud of.

I feel social media is very important. Let’s face it, it’s where everyone lives. EVERYONE. And if they don’t… they willlll. We’re all there, in some form of another. It’s the quickest, most effective and non-intrusive way of reaching at least my own audience, but any audience for that matter. Pictures, words, sharing… what’s not to love? Coming from the culture of webcomics, which I love, I feel the value of social media is extremely high.

Intelligent Life on Friday the 21st of November made mention of the Spider-Woman cover. How much of a battle do you think superhero comic book illustrators have when it comes to traditional versus modern portrayal of female superheroes?

Yes! Of course, they pulled the Milo Manara cover after I did that, but the message was still effective as a slight commentary. I think it’s an ever-evolving battle, really. As a culture, and I mean geek culture particularly, we’re more informed and ever-growing, and ideally, more inclusive of everyone. Old school isn’t what works today. A comic book illustrator today knows that a lot of their audience is women, geek women with brains and and expectation of good, real writing of female characters that are REAL, and rightfully so, and would rather read the new Batgirl with her actual functional real-world costume as opposed to the portrayal of Spider-Woman, à la Milo Manara. There’s a place for that, but the audience and culture of comics is beautifully becoming all-inclusive and more balanced. It’s sort of like balance is being brought to the force. I support this thinking, and my character Gwen in “Intelligent Life” is that voice, because she is that geek girl.

Are there any up-and-coming creators in the superhero space who’ve caught your attention?

I’ve taken note of a few newer artists in the past few years, particularly James Harren, whose gritty, fluid style is super-appealing, as well as an obvious influence from European comics and manga… I also like J.H. Williams III; his run on Batwoman was killer.

What do you think shows like Star Trek might be able to teach comic book creators even to this day?

Writing and continuity. Character development, in such a way that you dig at a deeper level of a character and really care about them. Doctor Who is a PRIME example of beautiful continuity. I think the best thing these shows can teach a comic book creator is the writing. Star Trek, Doctor Who, Firefly, etc… great examples of real character development, continuity and writing. Star Trek never jumped the shark… just sayin’.

This question is inspired by your Halloween strip on Intelligent Life; what is the most geeky everyday set of clothes you have?

Ha! There are so many (seriously…)… Hm, I’d say the day I wear my Doctor Who t-shirt that has the first 12 Doctors on it, with a long sleeve striped black and grey shirt under it (ala Sheldon), jeans and Skechers, with my official long Doctor Who scarf with it. That is the day I truly fly my geek banner loud and proud.

Do you think the life is better or worse for Alpha Males today than it was 10 years ago?

I think it’s worse for alpha males these days, and thank goodness, lol. While there are, of course, anomalies, today’s climate, like geek culture overall, is feeling more balanced. Acceptance of D&D loving, comic book reading, video game playing geeks like me is seeping into pop culture. And the media female ideal is evolving, too. The mainstream female ideal is slowly becoming less “ditsy and hot” and more “smart and beautiful,” so naturally, I think chest-beating is far less the leverage that it used to be. It’s going to take a lot more than alpha male shenanigans to attract a fierce nerd girl, and I love playing up this dynamic with Barry and Gwen in Intelligent Life. 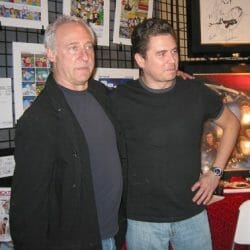 What’s the best thing you’ve overheard at a Comic Convention?

I was looking down at my table, drawing, when Brent Spiner (“Data” in Star Trek: the Next Generation) walks up to my table at a huge Star Trek convention in Las Vegas and says “Hey, cool comics! I’ve seen these on the internet. Can I have a drawing for my kid?” Needless to say, I gave him one of everything on my table. Hey, I’m a fanboy at heart. 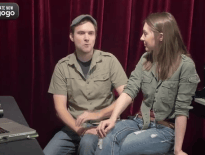 Music On the spot jammin’ to Nintendo themes 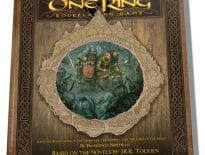