You are here: Home / Books / Comics / Steampunk delight: A review of Brass Sun 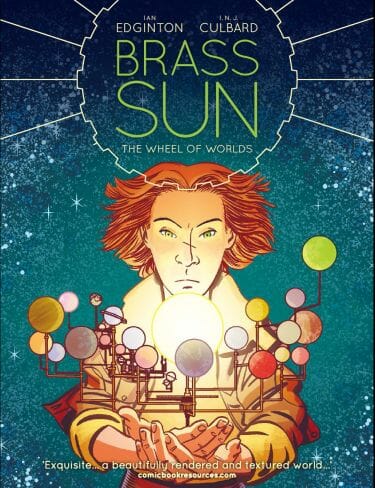 Brass Sun: The Wheel of Worlds

Imagine what it would be like if the sun was a super-hot orb on an actual Orrery and there was a network of planets connected to it by a mechanical contraption.

Imagine what it would take to transform a natural solar system into something like that.

Brass Sun starts off with all guns blazing. We’ve people being burnt to death for heresy, for doubting the religion and suggesting that maybe the weather was changing. That, at least, shouldn’t be too hard to imagine.

Ian Edginton (Hinterkind) and INJ Culbard (The New Deadwardians) quickly escalate from a brutal theocracy to cultural issues of a cosmic scale. A former head priest suspects the truth and is willing to die for it. His granddaughter is sent out of the house to escape the consequences of this defile but as a result ends up on an adventure of her own.

This is a world-hopping drama that uses clockwork and mechanisms rather than rifts and portals. As a result we get to tour through words created by Edginton and Culbard. This is a chance for wonderful characters, situations and plot twists.

It’s not that much of a twist to suggest that perhaps the sun really is fading. Surely that’s connected to the bizarre nature of this mechanical universe. The question is; why? Did something go wrong? Is the system broken? Can it be saved? 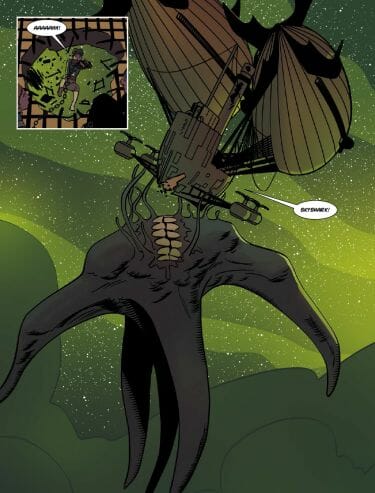 It’s hard to say whether it’s the characters or the worlds that really stand out for Brass Sun. The characters, especially Wren our female hero, work well. They’re heroic without being boring and predictable. They’re vulnerable without being dull and dumb. Equally, what’s not to like about a world composed of sky, a few patches of floating land and dangerous sky sharks? This is a roleplaying games setting in the making.

The edition of Brass Sun I looked at is available in print from Barnes & Noble and Diamond in the US and from plenty of comic book shops and booksellers in the UK. It’s also available as a digital purchase from 2000 AD’s own webshop and as an iPad app.

I really enjoyed Brass Sun. It was different. It was engaging. It had the right mix between real drama and unreal fantasy. This is a reason to subscribe to 2000 AD or to stalk their webstore and buy the next complication when it comes out.

Please note: My copy of Brass Sun: The Wheel of Worlds was provided for review. Published by 2000 AD. Praise be to the cog. 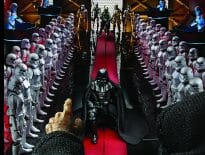 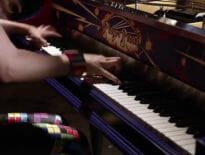